Walkin' in a Winter Wonderland

I was raised in Madison, Wisconsin. During Wisconsin winters, high temperatures hover around 32 degrees and low temperatures regularly dip into the teens. According to my good friend, weather.com, the city receives an average of 45 inches of snow each winter, but in recent years snowfall totals have been closer to between 70 and 80 inches.

In my 13 years of elementary, middle, and high school in Madison, we had only five snow days TOTAL. Two were because the temperature outside was around negative 20 degrees (windchill of negative 40-50 degrees), and the other three were due to early morning snow storms that dumped more snow than the city's expert road crews could clear (we're talking more than a foot, AT LEAST) before the buses needed to begin their morning runs.

Now I know that what I'm about to write might sound made up, like something your grandparents scoffed in your direction when you were a child and complained about how difficult your life was ("When I was your age, I walked 10 miles to and from school, uphill both ways"), but I swear to you, it's true. I walked to and from high school - more than a mile each way, almost every day - in FEET of snow. The walk often took 40 minutes, and I made the exhausting trek in full winter wear. Well, I take that part back. I didn't wear snow pants, because while they would have kept my high-waisted, stonewashed, tapered jeans dry, they would have made me appear even less cool than I already looked after pulling off my stocking cap and revealing my flattened, static-y head of hair. (Can you picture how awesomely cool I was back then? Good. Now add glasses and braces and you've completed the picture.) I walked down the center of the street because at 7:30am most people hadn't yet had a chance to shovel their sidewalks and the road offered tire tracks in which to walk more easily.

When I was six and my little sister was four, my parents spent a winter evening at hot tub party. After a few drinks the partygoers started rolling in the snow and then jumping back into the hot tub. The next morning, after my mom shared with us how much fun the evening had been, my sister and I asked if we too could play outside in the snow in our swimsuits. I'm sure my mom's response was something like, "um, I guess so...", which in our eyes made her the coolest mom EVER. Sara and I put on our suits and headed out back to the swing set. It was a little colder than we'd expected, so we went back inside and put on flip flops. And then sweaters. But we eventually made it to the swing set, and thus began an annual tradition of playing in the snow in as little clothing as appropriately possible.

My apologies for the odd scanning of the following pictures - my mom's scanner wouldn't cooperate.


Heading toward the swing set. 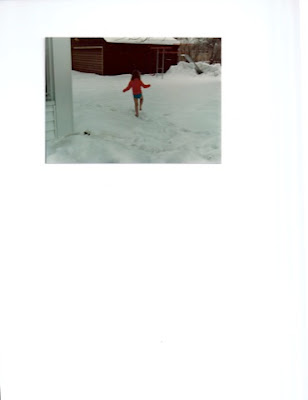 In the years that followed, and all while wearing ONLY swimsuits (we ditched the flip flops and the sweaters), we made snow angels, had snowball fights, went sledding, and, during my college years, ran past the front window of the restaurant across the street from our house. We encouraged others to join us, and they did; at one time or another, our parents, cousins, friends, and spouses joined in the fun. 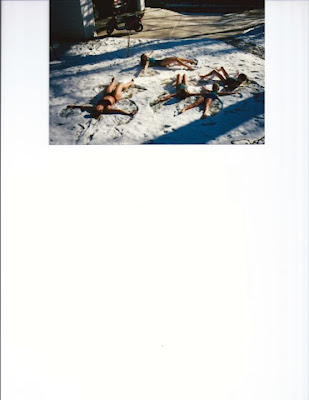 Sledding down a homemade slide. 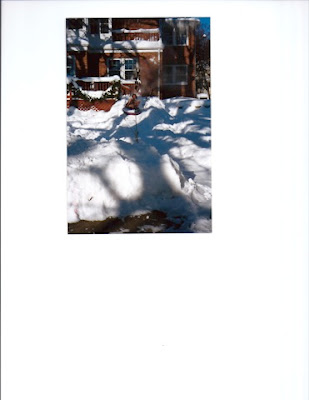 Sunbathing on the deck. 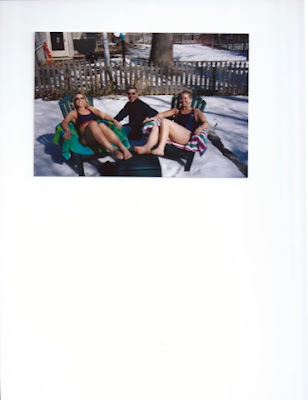 To many people born and bred in the southern half of the United States (and to Hallie, who while not a Southerner by birth, certainly shivers like one when it comes to cold weather), the thought of enduring such weather conditions, especially for an entire winter, is simply incomprehensible. I LOVE winter weather, however, and wear my cold-tolerance as a badge of honor, especially down here in Texas.

Last winter I didn't wear coats. I even gave two of my coats to my sister, who lives in Illinois. Last winter I didn't turn on the heat until Will complained that he couldn't feel his fingers anymore. (I know, parent of the year I'm not.) Last spring I pulled out my shorts when the temperatures climbed into the 60's (what?! That's when we wear shorts in Wisconsin) and my tank tops when the temperatures reached the mid 70's, not knowing how much hotter it would eventually get.

I'm not complaining about the winter weather here (how can you, really, without sounding like a crazy person - it's 72 degrees outside right now and when the kids wake up from their naps we're headed to the park with friends), but I miss the wonderland that is the Midwest this time of year. Snow, while treacherous to drive on and back-breaking to shovel, is so pure and simple and gloriously beautiful when it covers the otherwise brown and barren landscapes of winter. Snow offers children - and adults, should they feel so inclined - a playground in which to exercise their creative and physical sides. And snow, along with the frigidly cold temperatures, make home - coming in from the cold to enjoy a mug of hot chocolate in front of a roaring fire - feel even more comforting and safe than it does during the other three seasons.

I doubt there'll be much cold weather here this year, but by golly, if it snows, you can bet we'll be outside playing in it in our swimsuits over here at our house. College Station friends, you're welcome to join us.
Posted by Chasing Roots at 9:00 AM