We'd been in College Station less than 15 minutes when we heard "Gig 'Em" for the first time. The man working the rental car desk at the College Station airport said these words and made an odd thumbs-up-esque hand gesture as he passed the keys to our car across the counter; this man seemed a little nutty to begin with, however, so we didn't question his (what we believed to be) made-up words and crooked hands.

As the day played out we heard Gig 'Em quite a few more times: from the clerk at the Texas A&M Bookstore, the cashier at Freebirds, and a student we walked past near the Century Tree. Late in the afternoon we visited a second or twelfth bookstore (Tom was looking for a VERY specific TAMU t-shirt), where we asked the cashier - who appeared to be a TAMU student - what Gig 'Em meant. She was able to give us the basic gist of the phrase and accompanying hand signal, but to me her answer was insufficient. Thus the research began.

Pinky Downs, a TAMU alumni (class of 1906) and former member of the Board of Regents, is credited with the Gig 'Em phrase and gesture. The night before the 1930 (Gig 'Em is yet another example of a TAMU tradition that has been around for close to or more than 100 years) TAMU vs. Texas Christian University football game, Pinky attended Midnight Yell Practice. Aiming to rile up the crowd, Pinky shouted, "What are we going to do to those Horned Frogs?!" When the crowd wasn't immediately aware of the correct answer to this question, Pinky answered it himself with a rousing, "Gig 'Em, Aggies!" while making a fist with his thumb extended straight up. 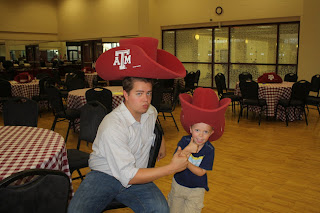 To pull all that together for you, a "gig" is a spear-like tool use for hunting frogs and the Texas Christian University mascot is the horned frog.

This gesture immediately caught on among the students and eventually became the first hand signal of the Southwest Conference (of which TAMU was a member in 1930).

Today, rather than end a conversation with "goodbye", conversations between Aggies often end with Gig 'Em and a thumbs up. Certainly makes those encounters with the bookstore and restaurant employees and the TAMU student make more sense. Not the encounter with the rental car company employee though - I maintain that he was nutty.

Gig 'Em is also the name of one of the TAMU yells, used during football kick-offs. One of these days I'm going to get to a game and see/here these things first-hand - unfortunately the TAMU move to the SEC has made tickets even harder to get than they were previously.

From what I can tell, the Pinky Downs explanation is widely accepted as fact throughout the TAMU community. I did find, however, a source that indicated that the TAMU Traditions Council also recognizes a less-known but possible origin for the expression. (Interestingly the source was NOT the TAMU Traditions Council website.) Apparently the the United States Army and the TAMU cadets use the word "gig" when referring to a violation of their uniform code. New cadets keep their shoes shined and their brass polished because it's expected of them, but also because they fear being "gigged" during inspection.

Both Will and Hallie have embraced Gig 'Em and now use it regularly. Regularly, but not correctly; Hallie especially doesn't quite have a handle on when it's appropriate to use the phrase. It's not uncommon for her to respond to my question, "Would you like some yogurt?" with, "Gig 'em, Mama." 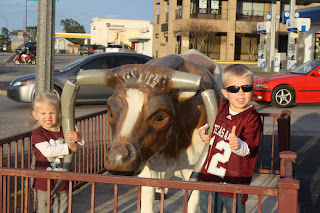 She'll get there, hopefully before it's time for her to become an Aggie herself. (If she's not accepted into the University of Iowa, of course.)