Two summers back, Will managed to get his upper lip stuck inside a bottle of red Gatorade and as a result, earned himself what I affectionately called a Gatorade bottle hickey mustache (though I of course never used the word "hickey" in front of Will - I didn't need him telling the cashier at the grocery store or our neighbors that he had a hickey on his face). After that ordeal - Will's mustache hung on for close to a week - I implemented a new beverage rule in the Ferris household: all colored beverages must be consumed from a cup or with a straw. This rule joined my first two beverage rules - all colored beverages must be consumed at the counter or outside and no blue beverages may be consumed (blue drinks weird me out, and I don't like how the blue dye stains the kids' lips and makes them look cyanotic) - to create my trifecta of beverage rules. I'm thinking of making one of these cute, Pinterest-ready signs for my kitchen: 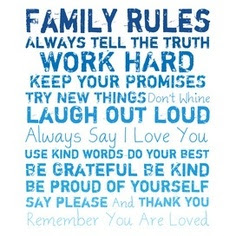 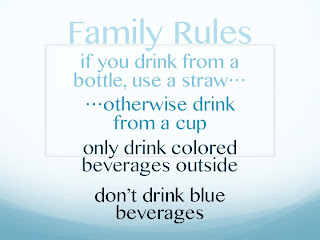 It can be difficult to uphold family rules away from home. For example, the kids convinced Grandma to buy them both red and blue Gatorade in bottles while we were on vacation in Wisconsin. I don't think I'd made Grandma aware of our beverage rules, but I'd be willing to bet that actually knowing the rules wouldn't have made much of a difference in this case; I'm sure Will and Hallie fed her some song and dance about how we should drink patriotic patriotic beverages in July, and because she's their grandma and thinks they're cute and clever, she agreed.

But that evening, the Hal Gal got her hands on a bottle of red Gatorade, and just like her brother before her, managed to semi-permanently suction her upper lip into the bottle for Gatorade bottle hickey mustache #2. 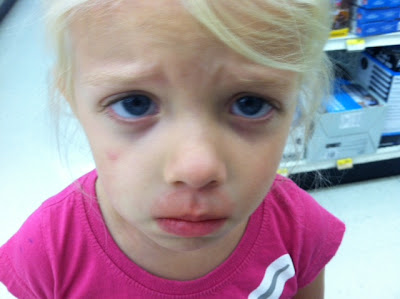 On a positive note, Hallie's hickey mustache only lasted for four days and we saw very few people we knew during that stretch of time.

From here on out, only clear Gatorade - consumed out of a cup and with a straw - will be allowed.
Posted by Chasing Roots at 6:00 AM