The Perils of Gatorade

I realized - thanks to midday headaches - that I wasn't going to make it through the hot, summer days without Gatorade. Water just wasn't cutting it when it came to replenishing my electrolytes (whatever that means), so we stocked up on Gatorade at Lowes, of all places.

The kids are now big fans of Gatorade as well, asking for it often after long walks, trips to the park, swimming lessons, etc. Last weekend we ventured out for a family walk and stop at the playground, not realizing just how hot it was outside. (Apparently we've yet to learn that every single late spring, summer, and early fall day is identically and cripplingly hot and humid here in Texas.) When we arrived home everyone was miserably tired, hot, dehydrated. Will asked for Gatorade, and instead of giving him a small amount in a cup, we just gave him the entire bottle to get started on. As he drank more and more Gatorade - without stopping to take a breath - his upper lip was sucked further and further into the bottle. When he went to pull the bottle away from his mouth, it was stuck. I helped him break the suction and ease the bottle off of his face, and all was fine. Or so I thought.

20 minutes later I caught a glimpse of what looked like a red-ish purple mustache on Will's upper lip. Assuming it was Gatorade, I asked Tom to wipe Will's face. Tom readied his wet paper towel and caught Will on his next fly-by though the kitchen, but after a good wiping I heard Tom say, "Um, Erin? It's not coming off." I rolled my eyes, thinking to myself that it couldn't possibly be that hard to wipe a Gatorade mustache off a pre-schooler's face, grabbed my own rag, and readied myself to clean up that boy the way only his mother could.

And then I looked closer. The red-ish purple stain on Will's upper lip wasn't Gatorade - it was blood, sucked to the surface of his skin when he'd gotten his face stuck in the Gatorade bottle. Will had given himself, as best I can describe it, a Gatorade bottle hickey mustache. 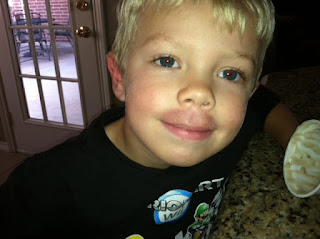 Gatorade may be delicious, but until these kids of mine can figure out how to drink out of bottles without giving themselves hickey mustaches, we're implementing a boycott. Or at least a boycott on all things bottled.
Posted by Chasing Roots at 9:47 AM