The Cliche is True...Painfully So

On Friday afternoon I sipped a glass of wine and chatted with two friends of mine, both of whom recently gave birth to their first child. One of the topics on which we lingered - and agreed with one another completely - was how frustrating and disheartening the phrase, "enjoy every moment...they grow up so fast" can feel.

You've been there, right? It's 10am. You've been awake for five hours, and in that time you've fed your children three times, been thrown up on three times, cleaned smashed banana out of the cat's fur, changed four diapers, wiped pee up off the playroom floor, rescued a Power Ranger action figure from the toilet, unclogged the toilet, and mopped up the flooded bathroom. You haven't eaten, showered, gotten dressed, or even brushed your teeth. How many of these moments did you enjoy?

Telling parents - especially new parents, whose days feel like weeks and whose nights require superhuman strength to endure - to "enjoy every moment" often comes across, no matter how well-intentioned, as cruel. These new moms and dads love their babies tremendously, but they simply aren't enjoying every moment.

And telling parents that time goes by so quickly? Well, that line sounds like a great big lie, because for them, time isn't going by so quickly. If they're anything like me when I had an infant at home, they're wondering how it's possible that their (according to the calendar) five-month-old won't head off to kindergarten this fall because it feels like they've been caring for that baby for five years.

While my friends and I caught up on our summers, my two rugrats made a dinner out of chips, salsa, and lemonade with their daddy and then entertained themselves by reading, coloring, and playing hide-and-seek under an empty table in the corner of the room. Compared to the babies, Will and Hallie - at only six-and-a-half and four years old - might as well have been heading off to college this fall. They seemed so BIG, so independent.

Holy crap...they DO grow up so fast.

Today Will starts first grade. FIRST GRADE. He's almost seven years old. He reads chapter books and can do basic multiplication. He's training to become a black belt in karate (or so he says) and can hit a baseball pitched to him at 30 MPH. He makes his own breakfast and vacuums his own bedroom. This is all quite difficult to wrap my head around, considering that just yesterday I was angry at the woman at the farmers market who played with six-month-old Will's curls and exclaimed, "what a big boy! They grow up so fast". And the day before that I cried in the car on the way home after a woman at the mall told me, as I walked past her pushing two-week-old Will in the stroller, to enjoy every moment.


Will at six months old, and then the very next day at six years old. 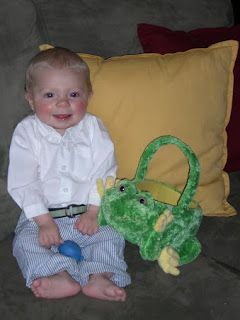 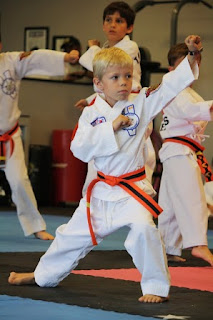 Where am I going with this? To be honest, I don't really know.

So here's what I do know. I know that telling parents - of children of any age - to enjoy every moment often makes them feel worse rather than better. I know that telling new parents that time goes by so quickly comes off as a cliche or even a lie. And I know that while the minutes feel like hours, the hours like days, and the days like weeks when those babies are teeny tiny, at some point the clock speeds up.

I still don't enjoy every moment, but this morning, as I send Will off to first grade, I'm forced to acknowledge that they do grow up so fast. And I don't like it one bit.
Posted by Chasing Roots at 6:00 AM