My plan for the first half of this week is to share a few of my favorite stories and pictures from our travels to Nebraska, Iowa, and Wisconsin and to essentially wrap-up "coverage" of our summer vacation so that next week I can go back to complaining about the weather. Just kidding. Sort of.

"He respects Owl, because you can't help respecting anybody who can spell Tuesday, even if he doesn't spell it right."          ~A. A. Milne

He always says that "numbers are his life" and my mom is his "reason for living", but from my vantage point, my dad's true passion is - and always has been - music.

On a visit to my dad's office as a 10-year-old, I noticed a brightly-colored bumper sticker poking out from behind the layers of newspaper cartoons, family photos, messy watercolor paintings, and poorly-crafted art projects hanging on his bulletin board. I pulled the faded rectangle far enough away from the cork to read the black, block lettering...it stated, proudly but longingly, "I Should Have Been a Rock'n'Roll Star".

I never doubted my dad's skills as an accountant or that he enjoyed his job. But on that day I thought of him differently than I had previously - I could see him on a different path. I could see him cozied up to the microphone, guitar clutched to his torso, on stage in a dark, noisy Northern Wisconsin bar where he played rock'n'roll music for hours in exchange for tips and all the beer he could drink. I could see him making a living and living a life that revolved less around the black-and-white of numbers and more around the blended grays of melodies and harmonies. On that day I wondered if he had regrets.

Though his rock'n'roll band days are behind him, music still plays an important role in his life. He "jams" with friends (and is kind enough to include Tom and me in their sessions whenever we're in Madison), shares his talents with friends and family members at weddings, and is now beginning to teach his grandchildren.

Whenever his family members and/or friends gather (especially in the name of a garage sale), my dad pulls up, guitar in hand. Singers join him for rousing renditions of "Drunken Sailor" and "Jamaican Farewell", the tone-deaf sit back in their chairs and enjoy the music they don't have to make, and enchanted children flock to his feet and watch in awe as his fingers transition from chord to chord and effortlessly strum those six strings. His grandchildren are no exception.

This picture was taken the summer before Will turned three, during our family garage sale. (That's a mandolin, not a guitar, by the way. Back then Will preferred the mandolin because it was little, like him.) 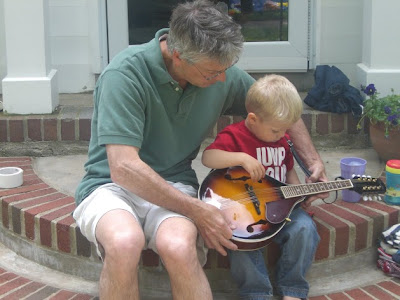 These pictures were taken three summers later, right after Hallie turned three (and during our family garage sale). 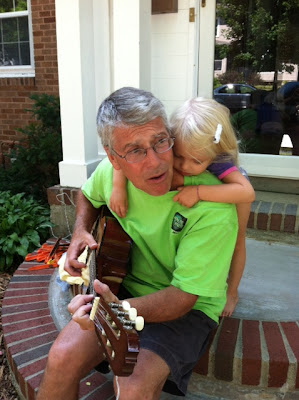 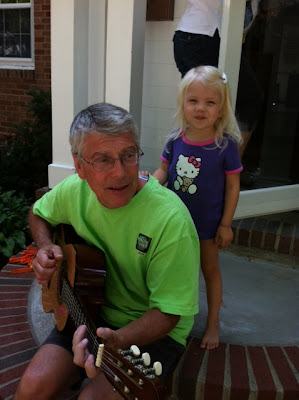 And this picture was taken this summer, when Lily was two-and-a-half (and during our family garage sale). 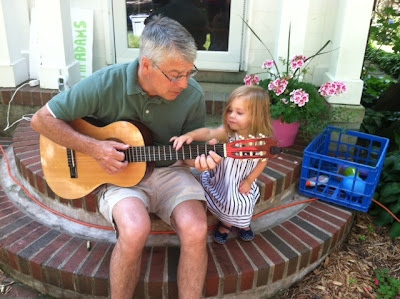 Hopefully we will add one more photo to this series in two years, when (during our family garage sale) then-two-year-old Carter finally gets to sit on the steps with his grandpa and his guitar.

I don't think my dad has any regrets, at least not any about stepping down off the stage and stepping up into an office. I'm pretty sure he wishes he'd bought a pink Cadillac back when he had the chance though...
Posted by Chasing Roots at 6:00 AM