Well, At Least No One Pooped in Macy's or Peed on the Patio...

A big thank you to my sister, Sara, for guest-posting here today! You may recall reading about Sara's daughter/my niece, Lily, here before - she's an adorably gorgeous and gorgeously adorable little girl, who, unfortunately for her parents, is following in her older cousin Hallie's spicy footsteps. Hallie's had a few "issues" at the public library in the past, and now it seems that Lily has taken up the torch.

Is is awful to admit that I'm glad that, for once, it's not my little girl wreaking havoc and leaving destruction in her wake?


It seemed like a great idea on that nice summer morning…story hour at the local public library where Lily would have an opportunity to interact with other children, learn something new, listen to books (which she LOVES to do), and do an art project (which she also LOVES to do). But I was wrong. It wasn’t a great idea, or even a good idea.

Getting ready didn’t go well. About 30 minutes prior to our departure I started the countdown. We needed to get dressed, brush teeth, and go to the bathroom. The mere suggestion of these things sent Lily into a tizzy. I reminded her that we had a few minutes and I was just letting her know we would be doing these things soon, but I knew her tizzy was just the beginning. I brought clothes out from the bedroom so Lily could see them for a while before getting dressed and while she happily agreed to wear the dress, she refused to wear the bloomers over her “favorite Ariel princess panties”. Fine, no bloomers. Choose your battles, right?

Brushing teeth came next and was, thankfully, relatively uneventful.

When it’s time to go to the bathroom, I usually go first and then Lily “decides on her own” that it would be a good idea for her to go too. Today was no different, except that by the time I was done, Lily appeared in the bathroom doorway in full princess attire, NOT the dress she was going to wear to the library.

Lily decided to pee, but as she climbed onto the stool and turned around, she fell off the stool, hit her head on the wall, and smashed her knee into the air conditioning vent.

The next few minutes were filled with crying, hugs, finally going potty, discussing band-aids, accidentally ripping the LAST Cinderella band-aid, more crying, pouting over band-aids, sitting in time-out for throwing the band-aids, and finally agreeing that an Ariel band-aid would be an acceptable replacement for the ripped Cinderella band-aid.

The walk was fine, aside from the fact that it was much muggier than I anticipated and I forgot my hair tie, so by the time we arrived at the library I was a hot mess.

Lily was immediately distraught over returning the library books. She wouldn’t sit with the other little kids, but eventually agreed to sit in the back on a little stool next to me and Carter.

Lily did well during the first two books, but by the third book, her interest shifted to a little girl playing in the toy area and she wouldn’t sit anymore. Meanwhile, Carter also wouldn’t sit anymore either and insisted that he nurse. I couldn’t nurse Carter while chasing Lily though, so we tried bouncing instead. Lily continued to run back and forth between the story area and the toy area, shouting excitedly in the quiet space about all of the new things she discovered.

Finally story time ended and we moved on to the art project – they were making hot air balloons. The plan was for kids to color their balloons and then tie little baskets under them, but Lily did NOT want to color or sit next to the very nice little girl at her table and was anything but nice about making her wishes known.

As more sweat dripped down my face – I’d yet to cool off and I was embarrassed – I thanked the little girl next to Lily for being nice to her. I tried to get Lily to sit across from the little girl, but Lily wouldn’t sit at all and screamed that she only wanted to be on my lap. Like there’s room, kid – this starving, bouncing little (big!) boy is taking up a lot of space over here.

But we made it work anyway.

The little girl offered Lily a pink crayon, but instead of accepting it kindly, Lily took the crayon and threw it. I told Lily she could either work on her project or go home. Going home must have sounded awful, because she finally started to color and to have a little fun.

Of course Carter started to lose it just as Lily finally settled in.

After finishing her balloon, Lily refused to move on with her project until she’d shown – and received a compliment from – everyone in the room. When Lily’s parade for compliments had come to an end, the book lady offered to help Lily complete her project (the book lady recognized how difficult it would have been for me to help Lily, what with the screaming infant in my arms). I took her up on her offer, but Lily apparently didn’t like how things were going and tried to hit the book lady. I mean, really?!

I was flabbergasted. When I told Lily that she needed to apologize, she hit a pile of crayons and sent them flying. We went to the corner for a timeout. She ran away. I dragged her outside to where the stroller was parked so that I could set Carter down and “help” her finish her timeout. Carter was screaming. Lily was pouting and crying and shouting “I AM DONE!!” (meaning she was done with time-out – yeah, right). I was still a hot mess.

Once Lily FINALLY calmed down, we went back inside to apologize to the book lady. I had to carry her in – and therefore leave Carter, who was strapped into his stroller and “the maddest he’s ever been”, outside the door to the room – and prompt her many times to apologize, which she finally did and then started crying again.

I was an even bigger hot mess when we left.

On the way home, Lily ripped up her art project and screamed for 30 minutes straight about wanting a lollipop and watching a cartoon. Needless to say, there were no lollipops eaten or cartoons watched in our house that afternoon.

After lunch, Lily called to me from the living room, “Mommy? Thanks for taking me to read books. I love books.”

Maybe it was worth it…

Remember this, courtesy of Hallie? 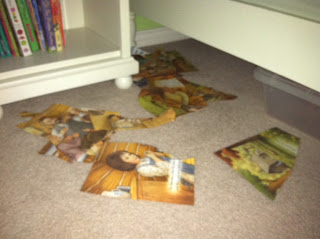 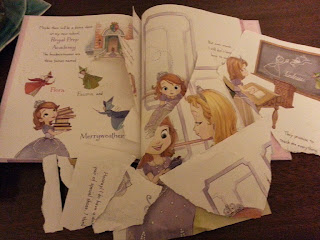 It's like they're related or something...
Posted by Chasing Roots at 6:00 AM