To Get to the Other Side: One Family's Adventure from Lake to Lake 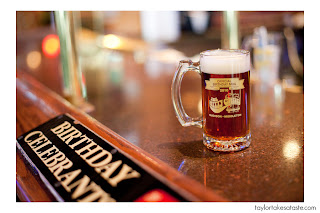 One of the best places to eat, drink, and/or celebrate a birthday in Madison, Wisconsin is The Nitty Gritty. Affectionately known as both The Nitty and the Birthday Bar, The Nitty Gritty is famous for its unique and delicious food, lively atmosphere, and making birthday celebrations special. Oh, and it's a hotspot for local and national celebrities whose visits are always captured in photos that cover the walls like wallpaper. I'm hoping to meet Robert Pattinson there for lunch this summer.

The Nitty is situated on a relatively busy corner in the heart of Madison, near downtown and within walking distance to the Capitol, the University of Wisconsin, and many of the University's sports venues. The location is great for students, UW sports fan, and community members who live and work downtown, but crossing the four-lane road in front of the building can be challenging at times, even for the quickest of pedestrians.

It's also important to note - important to this post, though not that important in general - that Madison was built on (and eventually grew out from) a narrow stretch of land between two lakes. Though the lakes are connected by a waterway and swimming would be a heck of a lot easier and less dangerous, it's not unheard of for individual and families of ducks to attempt to walk from one lake to the other.

10 or so years ago, Tom, my sister, my parents, and I were having dinner and celebrating Mother's Day at The Nitty. Our booth in the corner of the restaurant provided all of us with a view out the front window, through which we suddenly saw a family of ducks - a mother duck and her five babies - approach the curb on the far side of the street. We willed the them to stay put, but not surprisingly, the mother duck ignored our pleas and led her babies down off the curb and out into four lanes of traffic traveling 40 mph. We literally held our breath as we watched the six ducks scurry forward. Cars honked - not in anger, but in attempts to scare the ducks out of the road - and drivers swerved, slowed, and sped up to avoid crushing a member of the duck family.

After what felt like an eternity but was likely just under a minute, the duck family approached the near side of the road. The mother duck waddled across the sewer grate and hopped up on the curb, finally safe from the dangerous traffic. But the much smaller baby ducks weren't quite as lucky...as they waddled across the sewer grate, they fell - one at a time - through the grate and into the sewer. In the span of less than 10 seconds, all five ducklings vanished.

The mother duck started quacking frantically, her head swiveling back and forth looking for her babies. But there was no way for her to save them. It was awful to watch.

Just then, the two young men - just two college student buddies who were out for drinks that evening - sitting in the booth behind us jumped up and ran out of the restaurant. Through the window we saw them again, quickly approaching the sewer grate. One of the young men stood in the lane nearest the grate and tried to redirect the oncoming traffic so that the second young man could safely use what appeared to be all of his strength to pull the sewer grate up out of the pavement.

And then that second young man jumped down into the sewer.

As the young men secured the sewer grate back in the pavement, the mother duck and her five lucky babies waddled on to the next leg of their journey. (Even as the crow flies, the lake toward which they were headed was still at least a mile away. I wish I knew if they made it.)

When the young men walked back into The Nitty the place erupted with cheers and shouts. There were high-fives and hugs between strangers, and LOTS of free beer for the young men on behalf of The Nitty management and multiple patrons who'd watched the scenario unfold.

Sometimes, when I need an escape from "the bad", I replay that evening in my head as a reminder of all "the good" in the world.

I've heard it said that the true definition of a hero is a person who does something for someone who can't repay them. These two young men may not be heroes in the traditional sense, but on that day, in that moment, they were certainly heroes for that family of ducks. And a reminder of all the good in the world for the rest of us.

This is kind of what it was like watching those ducks cross the road...