What a Leader Looks Like
After allegations that members, including high-ranking officials, in his Armed Forces were "creating and exchanging explicit and profane emails" surfaced, Australian Chief of Army David Morrison publicly addressed the issue by filming and distributing this video. Though I support standing against sexual abuse and respect Morrison for doing so, my goal in posting this video is not to make a political statement. I'm posting this video because I found Morrison and his message - a commitment to upholding the values on which the Australian Army was built and protecting the rights of EVERY member - inspiring. What an incredible leader.

Angry Birds Family Tree
Have you ever wondered where the Angry Birds came from? One theory - which seems as plausible as any, at this point - is outlined below. But while this theory answers a lot of questions, it prompts quite a few new questions as well... 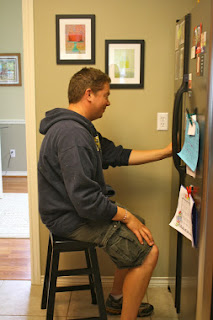 SOOOOO Tired
Sometimes the mental stress of his day job and the physical exertion that comes after mowing and edging the lawn, retrieving the patio umbrella from the roof, and building a lemonade stand for the kids combine to create the perfect storm of complete exhaustion. When this occurs, Tom has to sit down while he fills up his water glass from the refrigerator. Seems to me to would take more energy to carry the stool over to the refrigerator, sit down, stand up, and then carry the stool back to the counter...but that's just me. 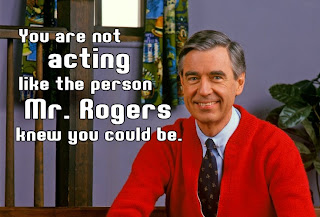 "You're not acting like the person Mr. Rogers knew you could be."

I may use it anyway, because it's SO, SO true.
Posted by Chasing Roots at 6:00 AM