A couple of weeks ago, some friends and I participated in the College Station Color Up 5K. We chose to represent our "club" - the "Activators" - and wear our Superman-style "A" shirts instead of our Color Up shirts, which was both a good idea (Tom and the kids could easily spot us in blue, since almost everyone else wore white), and a bad idea (my Activators shirt will never be quite the same, after the amount of color and sweat it soaked up that morning). Here are the befores:
And the afters:
I thought the kids might enjoy "throwing" a little color on me and my friends during the race, so I asked Tom to bring them to the park where the race both started and finished so they could join in the festivities. We had absolutely no idea how much fun they'd have, or how much fun we'd all have, for that matter. 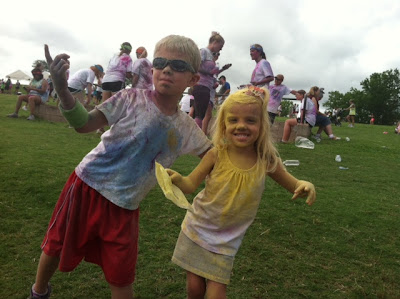 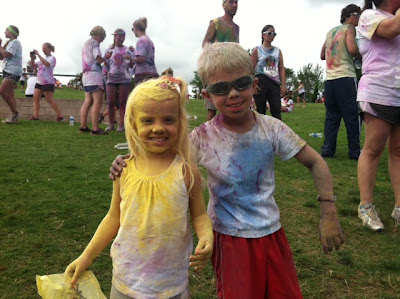 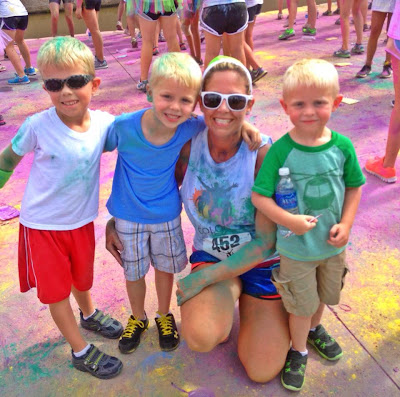 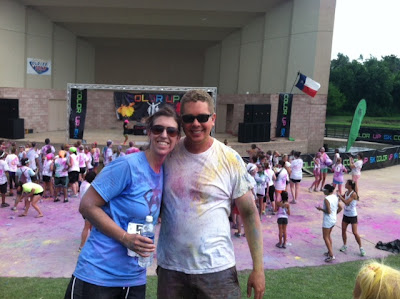 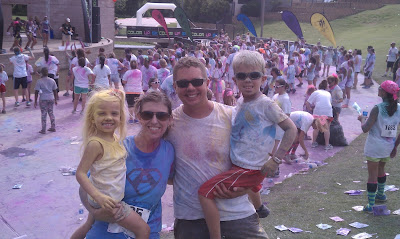 My colorful look was the result of participating in the face, but Will, Hallie, and Tom's color came from  enthusiastically joining these "color parties".


Will was somewhere in the middle of that pack of people, jumping around like a bean, throwing color with all the participants, and having the time of his life.

Hallie couldn't quite figure out how to toss her color packets "correctly", which you can see in this video. The chaos of the most recent color party had died down, but Hallie was still slowly working on her color packet...and instead of throwing the color up into the air, she was just dumping the contents of her packet onto her own head.

And to answer your questions...