It's no secret that the three-year-old version of my Hallie Claire is a teeny, tiny terror. Oh, she may come across as sweet and kind and gentle. And she's often overflowing with hugs and kisses for her family, friends, teachers, and the puppies at the mall's Puppy Store. But Hallie does absolutely everything - listening, obeying, sleeping, eating - on her own terms and in her own time, and is only sweet, kind, gentle, and overflowing with love when she wants to be. The rest of the time, Spicy McSpicy is deliberately and strategically chipping away at my sanity.
When Will was a baby, a mom of slightly older children told me that "any mother who calls the twos terrible never had a child live to be three". I laughed politely, and assumed that her son or daughter must have entered their "terrible twos" later than most kids.

But oh, how right she turned out to be.

Here's the problem. Two-year-olds are stubborn, lack both physical and emotional self-control, and insist on doing everything themselves, regardless of whether or not they're actually capable of accomplishing the task. On the worst days, we tell ourselves that life with our little one will be better once they're three; they'll be better communicators and will understand us on a more abstract level, therefore we'll be able to provide them with acceptable (to them) explanations and rationalize with them when they're unhappy about the circumstances in which they find themselves.

But we'd be wrong.

Three-year-olds are just as stubborn as two-year-olds, and are still pretty lacking in both the physical and emotional self-control departments. The kicker, however, is that three-year-olds are smarter than two-year-olds. They've learned to deliberately disobey, as well as how to use their behavior to manipulate the world around them. They are collectively - at least in my experience - the most difficult group of people on the planet. And Hallie...Hallie is their leader.
I bring all this up because the other day I realized I'd never gotten around to posting pictures of the rest of our new house. (I'm not sure I can call the house new anymore though, since we've owned it for more than a year and have lived here for about 11 months.) As I started making notes, I was reminded of all of the things around the house on which Hallie has already "left her mark". And I don't mean that in a good way (or with regard to tearing pages out of library books or destroying toys or household items).
Here's the list, as it stands as of this afternoon:

1. Hallie peed on bathroom floor at least five times, and on our new living room floors twice. These were not accidents.

2. Hallie peed in the shed. I couldn't care less about pee in the shed, but the fact that she did it to protest the fact that I wouldn't let her run around outside completely naked (I was legitimately worried about her sitting in ants) makes it worth mentioning.

3. Hallie clogged the toilet five times, twice so severely that she flooded the entire bathroom with more than an inch of toilet water.

4. Hallie broke two door knobs, the television stand/cabinet door, and the pantry door by hanging on them. You wouldn't guess this would be possible, seeing as she weighs a measly 24 pounds, but I assure you, it is.

5. Hallie chipped the paint off the woodwork in bedroom with a My Little Pony's unicorn horn. For no other reason than she could. After this little project she came out of her room and informed me that she "broke her room".

6. Hallie colored the stroller/bike trailer windows, the back seat of the car, and the playroom toy box, table and chairs, and couch. And then she taught her 15-month-old cousin to follow her lead.

7. Hallie stuck her bubble gum to the bottom of her shoe - I assume just to see what would happen - and then walked through the master bedroom and bathroom. I think she fast forwarded the timeline on us replacing that carpet by a year or so. 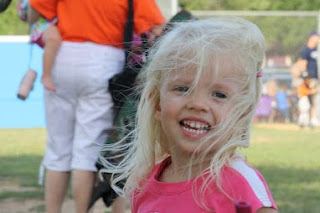 That's all I've got - this week. Once I take care of these around-the-house fixes I'll be sure to finish writing about and posting pictures of the new house!
Posted by Chasing Roots at 6:00 AM