In Defense of Howdy

A born-and-raised Midwestern friend of ours came to visit us in College Station. During his stay, Tom gave him a tour of his office and lab, and then while up on campus, we walked around some of TAMU's more interesting academic buildings and outdoor spaces.

I have touched on the topic of Aggieland/College Station/Texas/Southern vernacular in the past, so many of you reading today already know that “Howdy” is the official TAMU greeting. Current students, alumni, administrators, and faculty and staff members use the phrase regularly while walking around campus and at the start of almost every class and meeting, making TAMU – at least according to anyone affiliated with the University – the “friendliest campus in the world”.

TAMU etiquette suggests (in a politest way possible) that if someone greets you with “howdy”, you should respond in the same manner. Tom and I likely (unintentionally) offended a few locals when we arrived in College Station; at first we didn't know the protocol, and then for a while we didn't feel comfortable using the phrase. Now, however, we say it loudly and proudly.

Tom in particular, because he spends every day on campus, throws "howdy" out into the world like candy during a parade, and his willingness to do so while walking campus with our Midwestern friend left him somewhat dismayed. Perhaps he felt Tom had abandoned his linguistic roots, or that Tom had made himself too comfortable in a region of the country he always expected we would call home only temporarily. Whatever the case, when he commented on Tom's choice of words, Tom - much to his surprise - found himself defending "howdy".

"It's both polite and comfortable, and it's considered acceptable in formal and informal situations alike. It's friendly and efficient, and I think it unifies our students, administrators, faculty, and staff. What's not to like?!" 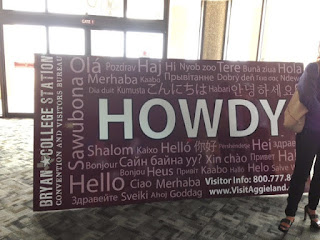 Don't get me wrong - there remain a number of things about Texas I won't support or defend. (You will never hear me supporting the summer weather or defending the lizards, for example.) But when we weren't paying attention, both Tom and I started standing up for little - and then bigger - pieces of our lives in Texas we had no plans to ever embrace.