Between June 2016 and June 2017, (some combination of) the four Ferri plan to dine at each of Spoons University's "45 Places to Eat in College Station Before You Die". Which meal we eat will depend on each restaurant's specialties, meaning we won't visit a steakhouse for breakfast or a donut shop for dinner. We (Tom, Will, and I) have committed to choosing menu items on which the restaurant earned its reputation, meaning we won't order a hamburger at a seafood restaurant or chicken fingers at an Italian restaurant.

We plan to individually rate each of the restaurants on food, service, and atmosphere. We have no experience as food or restaurant critics, but we'll do our best and hopefully give BCS readers a little insight into where they can get great food but also enjoy a meal with the family in tow.

If you missed the Meet the Reviewers, Round 1, or Round 2 posts, check them out before reading the reviews below - they'll make a lot more sense with a bit of background information!

Turns out my initial timeline (June 2016 - June 2017) in no way meshed with our busy schedule. We continue to work our way through the 45 restaurants on the list (though now the list is down to 44, as I just read that Mess Waffles Etc. closed a couple of weeks ago), but our opportunities to dine out have been and continue to be fewer and farther between than I imagined they would be...looks like this is a two-year project!

And now, on to our third group of restaurants! 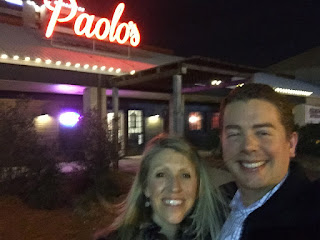 11. Paolo's
The newest Italian restaurant to College Station, Paolo’s is serving up true authentic Italian with New York influences. Their vast menu boasts fresh ingredients at affordable prices. Try their chicken picatta or seafood fra diavolo, which does not skimp out on the seafood.

Across the three times I have dined at Paolo's, the food, service, and atmosphere have impressed me. I enjoyed multiple different salads and entrees from the Paolo's family style menu, but when ordering on my own I can't say no to the Watchdog Rock Reisling, stuffed mushrooms, balsamic streak and arugula flatbread, and spaghetti bolognese.

12. Grub Burger Bar
Hands down some of the most unique burgers in College Station. The Jive Turkey and Lockhart Legend are some personal favorites, but you really can’t go wrong. Be sure to try one of their handcrafted milkshakes! You can even get them spiked, like their Tipsy Worms & Dirt. Childhood memories, meet alcohol.

Grub makes delicious and unique burgers, but the rest of the experience - at least for me - has been mediocre. I want to love their french fries, but I prefer fries with a little substance and Grub's are long and skinny. I also want to love their milkshakes, but Grub's ice cream and whipped cream have an artificial aftertaste. The staff with whom I have interacted haven't been rude, but neither have they been particularly friendly or helpful. I also dislike that the employees tell customers where to sit; in a casual, relaxed restaurant where customers order from a counter, fill their own fountain drinks, and seat themselves, customers should be be allowed to in fact seat themselves. We've been put far from the televisions (Will's biggest issue) and at tables where the sun shines directly into our eyes and it's complicated to request a move and then have the order delivered to the new table number.

13. Napa Flats
Best described as Californian cuisine meets Italian flair, Napa Flats is dishing out some serious good eats from their wood-fired grill. Their pizzas are expertly crafted, and if you have a sweet tooth, go for their seasonal cobblers or the gelato they make in-house!

I went with a group of friends for a birthday party (we made reservations ahead of time so they knew we were coming), and while I appreciated Napa Flats' willingness to plan ahead for our relatively large group of 12, the service we received once we sat down was poor. We arrived early - before 5pm - so we could beat the rush and make a 7pm painting reservation. Our waitress was inattentive and short with us, and she just barely got us out the door at 6:50pm. That being said, my food - the Mediterranean appetizer plate and poblano mac'n'cheese - was amazing. 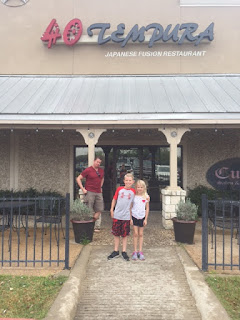 14. 40 Tempura
You’d think for a small town our sushi choices would be sub-par. But 40 Tempura has some of the freshest fish in the city, and they make some amazingly creative and tasty rolls.

I went to 40 Tempura ONLY because it made Spoons' list. Tom and Will both wanted sushi, so even though Hallie and I wanted anything but, we agreed (well, I agreed - Hallie did no such thing) to give it a try. The service was excellent: the waitstaff was attentive, polite, and helpful, especially when I explained that Hallie and I could not stomach any raw meats. The atmosphere was too quiet, dark, and solemn for my taste - I like casual and bustling, where a lively conversation, a laugh, a cheers, or worse, a meltdown by a child, doesn't draw attention to the table - but Hallie and I enjoyed the miso soup and chicken fried rice and Tom and Will were pleased with their sushi selections.

15. Blue Baker
Blue Baker is known for their out of this world homemade fresh artisan breads. Then they make sandwiches out of that bread and the angels begin to sing. Best part is you can get free food depending on how much blue you wear (or paint on your body). A poor college kid’s dream!

I agree that Blue Baker's croissants make the angels sing, but beyond that I think this sandwich shop is a bit overrated. Blue Baker's sandwiches, sides, soups, and pastries hit the spot, but for me they don't surpass Panera or our other local delis. Blue Baker did climb a notch for me recently though, when they built a new restaurant closer to our house and put a tiny but fun playground out back. Even though their food doesn't take top billing, I would pick Blue Baker over Panera if I had my kids with me or were meeting a friend with kids.