Writing
My second blog post for the Mama Bear Dares website went up earlier this month! I finished and submitted my third post last week, and thus far I am enjoying my "Mama Bear Self Care" assignment. I have lots of ideas swirling around in my head, and I look forward to flushing them out and putting them down on "paper". If you haven't already done so, check out the Mama Bear Dares website for lots of cool and inspirational blog posts and podcasts!

Reading
After a solid March, April didn't go quite as smoothly. I continued to read regularly - though not a precise 10 pages a night - but as I reached 75% of the way through a good book, the library made me return it because it had been reserved by someone else. I wish our library system operated on the (what I consider standard) four week borrowing system - more often than not, three weeks isn't enough for me because I read multiple books at once.

Speaking of, right now I'm about a third of the way through two books: Six Wakes by Mur Lafferty and Mama Bear's Manifesto by Leslie Klipsch. I own Mama Bear's Manifesto so I know I can finish it without the pressure of a deadline, but the library clock is ticking on Six Wakes...I wish I had more time to read! 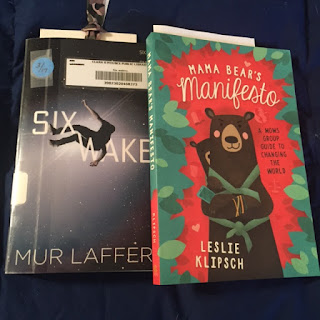 Watching
A few months back we moved the cable box in our room to the newly made-over family room. (I think it has again been moved, this time to the back porch. I control the cable box in the living room and not much else when it comes to technology.) With no cable box, if I wanted to watch television in bed my options included Netflix and my computer; on the first cable box-free night I opted for Netflix and realized that it had recently made available all 10 seasons of Friends. For the last four? five? months, I have watched Friends from start to finish while I get ready for bed, brush my teeth, and give my email one last glance. I finally wrapped up the finale about a week ago and already I miss them so much...

In the world of movies... Will, Hallie, and I saw Boss Baby in the theaters a week ago. I chuckled a couple of times and both kids enjoyed it, but I won't watch it again or buy it when it comes out on DVD. Over Easter weekend, we watched Magnus, a documentary about the chess prodigy, grandmaster, and current World Champion Magnus Carlsen, on Netflix. It was unexpectedly interesting, even to Hallie, who planned to watch only the required 10 minutes (we told her she had to join the family for at least 10 minutes before she could go watch Equestria Girls on the iPad) and stuck around until the end. Even if you're not a fan of chess, the story is engaging and fascinating!

Listening To
I just finished the podcast S-Town by the creators of Serial and This American Life. (The "S" stands for S&%$, so if you choose to listen, prepare yourself to hear that word quite often.) S-Town follows host Brian Reed as he investigates the validity of a series of emails he receives from a man named John about an alleged murder in small-town Alabama. As the podcast rolls on, "someone else ends up dead, and the search for the truth leads to a nasty feud, a hunt for hidden treasure, and an unearthing of the mysteries of one man's life". This podcast changed directions multiple times and I didn't feel completely satisfied at the end, but I stayed with it until the conclusion and was glad I did. 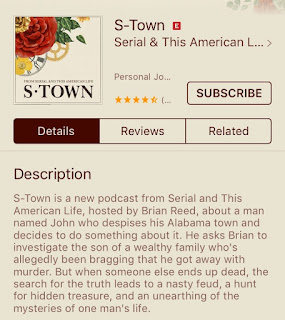 Trying/Using
In the chess documentary I mentioned above, Magnus played games of blindfold chess against some of the best chess players in the world, and won. Convincingly. (Blindfolded chess, otherwise known as sans voir, is "a form of chess play wherein the players do not see the positions of the pieces or touch them. This forces players to maintain a mental model of the positions of the pieces. Moves are communicated via a recognized chess notation." Will decided that he too should play blindfold chess, and proceeded to beat me, his grandma, and Tom. He's been beaten a couple of times at school, but the fact that he can play at all - without ever looking at the board and according to a board he sees only in his head - amazes me. He's pretty sure he can teach me...I'm pretty sure my mama brain is too full for blindfold chess. 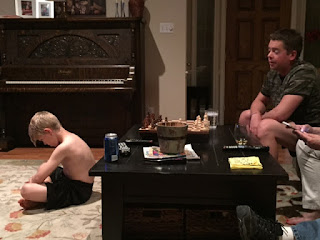 For Christmas my sister and her family gave Will a three-month subscription to Tinker Crate. He finally found time to pull out one of his kits this month, and LOVED building the cool project below on his own. If you haven't checked it out, do so - it would make a great gift!
This could fall under Trying/Using or Eating/Drinking, but I decided to put it here... Last month my parents gifted me my Grandma Hallie's china. We used it on Easter for the first time, and I can't wait to continue sharing meals over these beautiful dishes for decades to come. (And to someday pass the dishes on to my Hallie as well.) 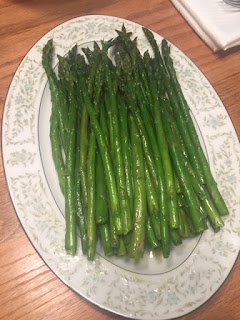 Wearing
This month I bought boring summer essentials (little about summer shopping excites me) like solid-colored v-neck t-shirts and basic shorts from Old Navy. I continue to clean out closets and drawers though, as we have a couple of garage sales - one here in BCS in May and one in Illinois in July - coming up. I think I've turned 40 Bags in 40 Days into 60 Bags in 60 Days!

Eating/Drinking
Besides spinach salad and dessert? Here are a few new recipes we tried - and approved - this month!