Rate Your Restaurants: Meet the Reviewers

Between June 2016 and June 2017 the four Ferri plan to dine at each of Spoons University's "45 Places to Eat in College Station Before You Die". Which meal we eat will depend on each restaurant's specialties, meaning we won't visit a steakhouse for breakfast or a donut shop for dinner. We (Tom, Will, and I) have committed to choosing menu items for which the restaurant earned its reputation, meaning we won't order a hamburger at a seafood restaurant or chicken fingers at an Italian restaurant.

We plan to individually rate each of the restaurants on food, service, and atmosphere. We have no experience as food or restaurant critics, but we'll do our best and hopefully give BCS readers a little insight into where they can get great food but also enjoy a meal with the family in tow.

As Tom, Will, Hallie, and I began reviewing College Station and Bryan's restaurants, it became obvious that the four of us ranked service, atmosphere, and food differently from one another. I expected as much, given what I know about our our vastly disparate food preferences, restaurant biases, and life experiences. But you, as readers, might not have expected this, at least not to such an extent; unless you dine with us regularly, you probably don't know, for example, that Tom puts hot sauce on EVERYTHING, Will has a host of food limitations, and Hallie isn't a big fan of eating in general.

Tom suggested I briefly outline our likes, dislikes, allergies, intolerances, and relevant personality traits to better explain where each of the four Ferri are coming from. I liked Tom's idea, and started talking excitedly about how I would compile all of our information in a nice, neat, bullet-pointed list. Not a fan of nice, neat, bullet-pointed anything, Tom suggested I create an interesting graphic - our individual details, layered on top of our photos - instead. Seeing as I know absolutely nothing about graphic design, I suggested Tom create said graphic for me.

So here you have it, a brief outline - with photos - of where each of us stand heading into this culinary adventure. 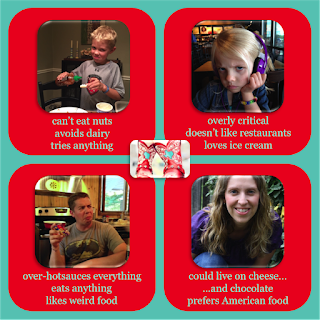 Come back next week for our first round of restaurant reviews!

The above pictures perfectly showcase how Will, Hallie, and Tom each approach food. Will is putting sriracha sauce on a frosted sugar cookie because Tom dared him to do so, Hallie is giving me one of her patented "I don't want to try that _____" looks, and Tom is eating a cupcake with Bertie Botts' vomit-flavored jelly beans baked inside. We have zero pictures of me eating anything, so my picture doesn't involve food, drink, or restaurants.
Posted by Chasing Roots at 5:00 AM