Do You Like Your Lizards Washed and Dried? Or Just Washed?

From what I can tell, the lizards have learned how I feel about them (spoiler alert: I hate ALL the lizards), shared this information with their lizard friends, and decided to collectively wreak havoc on my home. I came to this conclusion after my friends informed me that I have had more lizards in my house in the last month than they've had in their homes in years.

We've had four lizards attempt to join our family since the end of September. One ran out from under the dresser and became disoriented in the corner of the bedroom. Slightly more upsetting was the one that ran inside in an attempt to avoid playing with Tux. Even more troubling was the one that jumped out of my hanging shirt (thankfully toward Tom and not me) while Tom and I were having a conversation in the laundry room. Last but not least and without a doubt the most disturbing was the one I unknowingly carried inside in a pile of dirty gym clothes (Tom sometimes hangs his sweaty gym clothes outside to dry), put into the washing machine with a load of whites, and washed to his death. 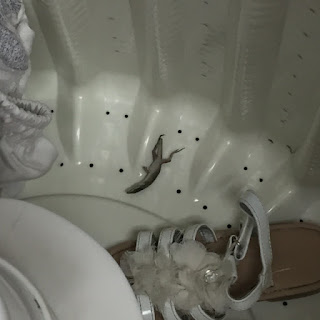 I guess a washed lizard is better than a washed and dried lizard…right? Because yes, I've now done both.
Posted by Chasing Roots at 5:00 AM