Last week Tux made friends with yet another lizard. They were "playing" together near the back door, so I warned Will and Hallie of the lizard's location and reminded them of our family rule about lizards: whoever lets the lizard in has to figure out how to get the lizard back out.

Sure enough, not three minutes later Will opened the back door and let the lizard inside. But instead of taking responsibility for his actions, Will kind of fell apart…and it made me feel guilty enough to catch the lizard myself.

If you recall, for me, "catching" a lizard simply means trapping it under a Tupperware container so Tom can take it outside when he gets home.

Not to toot my own horn or anything, but I trapped that lizard like a boss.

And then Tux lost his bloody mind.

He could not handle the lizard's presence inside the house, not because he dislikes lizards (we know this isn't the case), but because he couldn't play with it. He ran in circles around the Tupperware container, meowing constantly and asking me with his eyes to "pretty please let the nice lizard out". 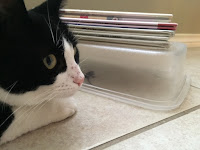 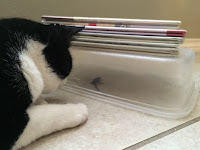 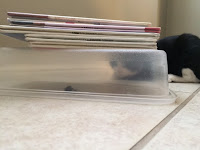 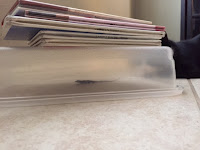 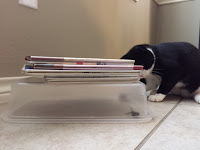 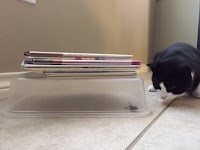 Yes, there are books on top of the Tupperware. I like to make "super sure" my trapped lizards can't escape.

After 20 minutes of steady meowing - Tux has tremendous staying power when it comes to making noise - I had to put Tux outside because I couldn't take it anymore. Within two minutes of setting foot on the patio, Tux found himself yet another lizard with whom he could make friends and from whom he could steal a tail. 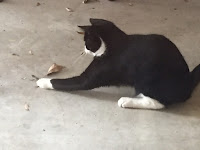 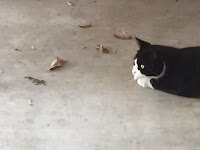 People always tell us we should get a second cat so Tux will have someone to play with; I tell them he already has plenty of friends.
Posted by Chasing Roots at 5:00 AM