Hallie has recently renewed her efforts to develop a positive relationship with Tux. He makes a very specific noise - a meow, but with a certain undertone of impatience and impending anger - when he wants to be put down or let go, and I've been training Hallie to hear that in his voice and immediately release him. She's doing much better, but their relationship remains strained.

Last week I saw Hallie pick Tux up and carry him to her room. A minute later I heard a quiet version of Tux's "let me go…or else" meow so I started toward the sound in case an intervention was required. I found Tux locked in Hallie's hug of steal, first pleading with me with his eyes and then focusing on the door, looking for an escape. 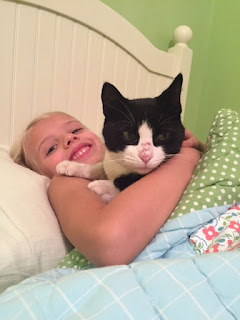 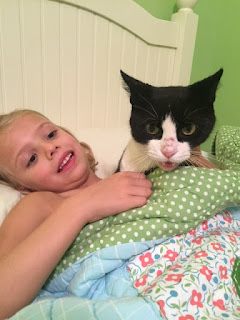 You can tell by her smile that Hallie didn't hear the urgency in Tux's voice. I guess we have a little more training to do. After taking a couple more pictures I took pity on Tux and released him from his captivity in Hallie's bed. She teared up when Tux left her room, and full-on cried when Tux went immediately across the hall to another child's bed. 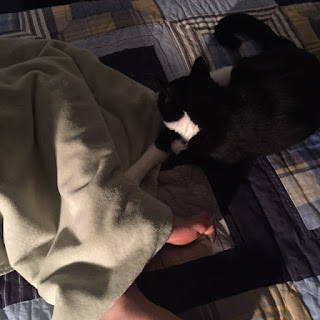 We might have to get Hallie her own kitten...
Posted by Chasing Roots at 5:00 AM