Not Wanted, Dead or Alive

Well, I finally did it. I held a lizard in the palm of my hand.

I'm getting ahead of myself though - let's back up and start at the beginning.

On Friday afternoon I pulled a load of laundry out of the dryer and carried it into the living room. I plopped down on the couch, turned on The Ellen Show, and began folding. Midway through the basket, I noticed a grayish-brown long, slender, and somewhat misshapen object resting on a pair of Will's shorts. Assuming it was a stick or an action figure accessory - which made sense, given its proximity to Will's shorts pocket - I picked it up. In my hand it felt more fragile than a stick and crustier than a miniature sword, so I turned on the lamp next to me to get a closer look.

Imagine my shock - terror, really - when I realized that in my palm I held a thoroughly dried and positively dead lizard.

I screamed, and hurled the lizard across the room. He didn't stay across the room though - he bounced off the ottoman and came right back at me, landing just a few feet away from my laundry folding station. I couldn't bear to pick him up a second time, so I bribed Hallie to cover him with a paper towel. He remained under his paper towel blanket until Tom came home. 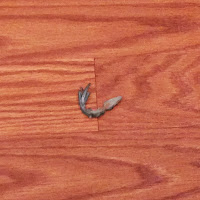 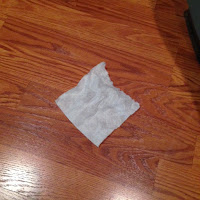 It was, and continues to be, just a little too much for me to handle on a Friday afternoon.
Posted by Chasing Roots at 5:00 AM