Last week I pulled a folded up piece of paper out of the bottom of Will's backpack. I couldn't help but smile when I unfolded the tiny rectangle, for everything about this "gift" for his grandparents was so typically "Will".

Second, Will's poetry skills closely match mine at his age.

And third, he now writes like the Texan he recently became. 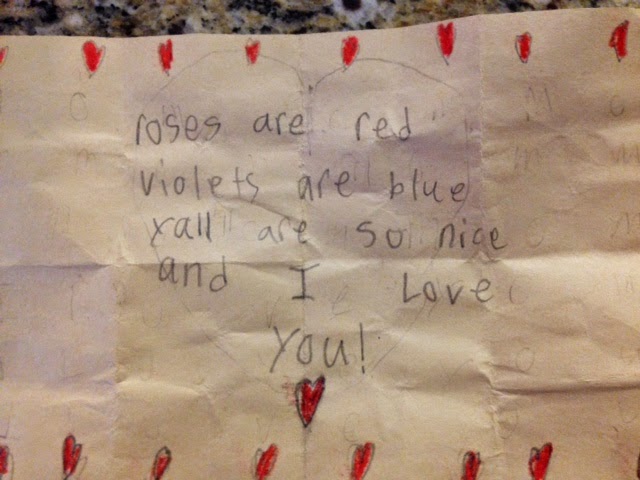 When we first moved to Texas, some of the commonly-used terminology here rubbed me the wrong way. I didn't understand "howdy", stayed as far away from "y'all" as possible, and felt uncomfortable asking my kids to use "yes, ma'am" and "no, sir". (Don't get me wrong - I will settle for nothing less than respectful children. But I didn't like asking Will and Hallie to speak in a manner that, while culturally acceptable and encouraged here, was completely foreign to me.) But now, four-and-a-half years later, I smile every time "y'all", "howdy", or "yes, ma'am" escape my childrens' lips. Or in this case, end up in the first poem they ever write.
Posted by Chasing Roots at 5:00 AM