Will, Hallie, and Tom have recently become infatuated with the Pokemon Trading Card Game. I haven't yet learned to play (I find I can get loads of writing done once they begin and eventually become engrossed in an epic Pokemon battle) and therefore know very little about the game, but I feel fairly certain it's meant to be played between two to four people, and not between one person and a cat. 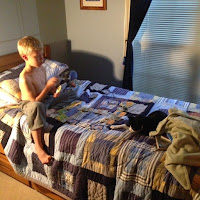 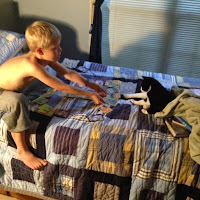 Tom poked his head in on Will one night last week and found what looked an awful lot like Will vs. Tux in a game of Pokemon…I certainly hope Will won!
Posted by Chasing Roots at 5:00 AM