Just a month after we moved to Texas, our Green Bay Packers won the Super Bowl. We took the victory as a sign from the football universe that we were supposed to live in Texas instead of in Wisconsin - it wasn't, after all, the first time one of our teams achieved greater success without us cheering them on from the stands.

The following year (two years ago) we expected the Packers to return to the Super Bowl, so when they lost their first playoff game to the New York Giants we were crushed. On Super Bowl Sunday, the kids and I wore our Packer shirts in protest. 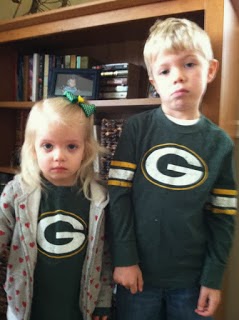 Last year, more of the same. The Packers won their Wild Card playoff game, but lost the following week to the San Francisco 49ers. For the second time, the kids and I wore our Packers shirts in protest on Super Bowl Sunday. I don't know about you, but I think they look not only older, but also meaner, than they did the year before. 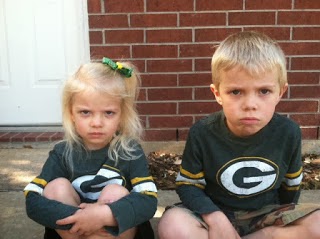 This year the Packers barely made the playoffs and lost their Wild Card playoff game to, once again, the San Francisco 49ers. (Side note: is it weird that when the 49ers cross my mind I still think of Joe Montana as their quarterback?) And once again, the kids and I supported our team on Super Bowl Sunday. They definitely look meaner this year. 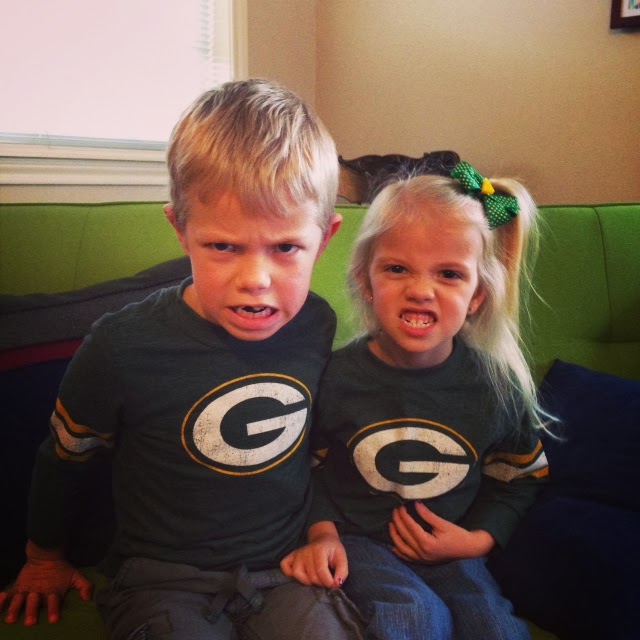 I love this tradition, especially because it serves as a reminder of how much the kids grow (in size and apparently in meanness as well) from one year to the next. Both Will and Hallie have rocked the same Packers gear since we first moved to Texas - when they were four years and 20 months old respectively - and while their shirts started off a little large, they now look comically small. I think I'll continue putting these two shirts on them until doing so is physically impossible.

As much as I enjoy football season, I felt ready for it to end on Super Bowl Sunday. Farewell football, hello March Madness! (I won the Ferris Family March Madness Bracket Competition last year, and I'm aiming for a repeat victory this year.)
Posted by Chasing Roots at 6:00 AM