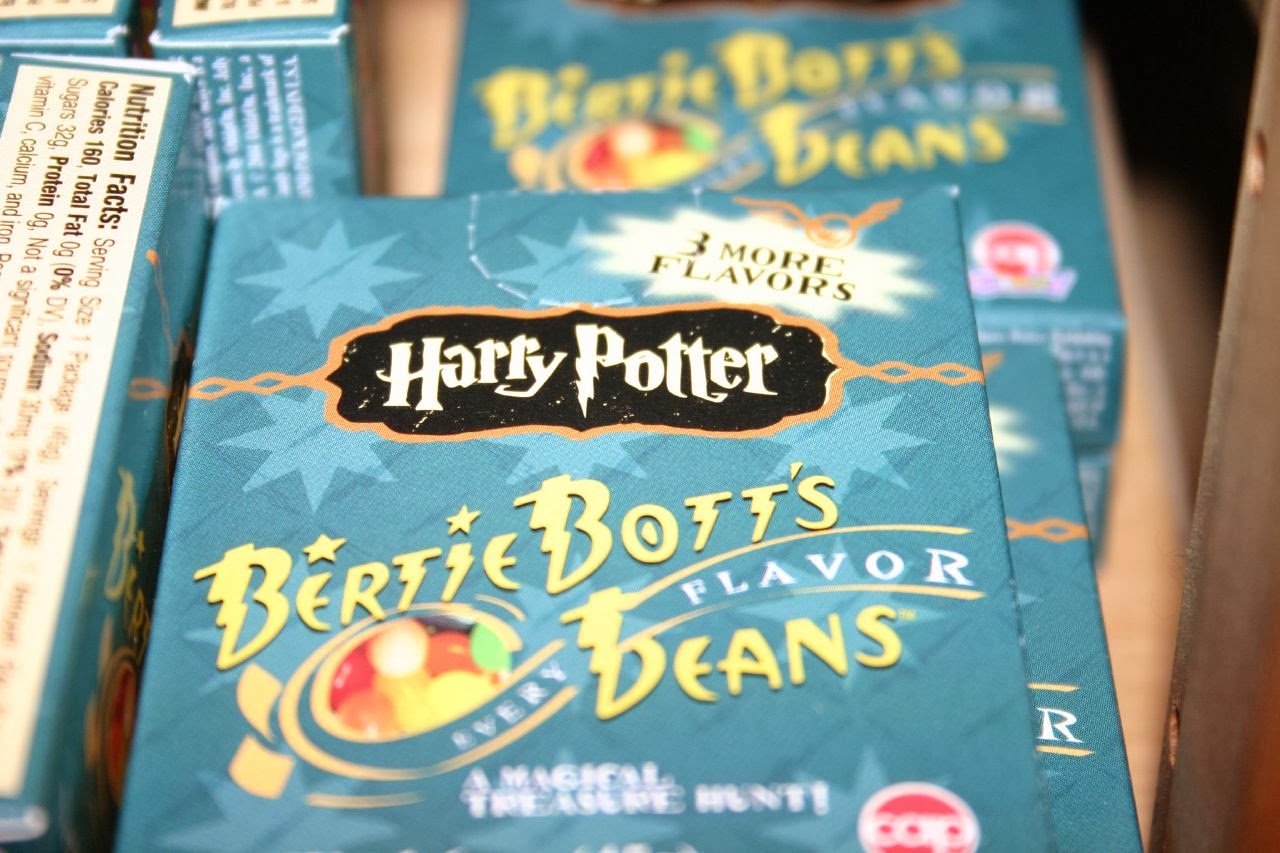 12 years ago I stumbled upon a new kind of candy while perusing the aisles at Target. Based on one of the treats fictional characters Harry Potter, Ron Weasley, and Hermione Granger purchase at Honeydukes Sweetshop, Bertie Bott's Every Flavor Beans look like Jelly Belly candies (and are made by the Jelly Belly company) but taste like your worst nightmares. Yes, approximately half of the beans, with flavors like banana, blueberry, and watermelon, go down smoothly. But the rest of the beans taste like dirt, booger, soap, and dog food and just might make you vomit. Oh, wait…there's a bean for that too.

Let's pause for a moment to consider what must go into creating a piece of candy that tastes like vomit...

When I gifted him his very first box of beans, Tom's excitement mirrored Will's when he received his Nintendo 3DS from Santa last Christmas. Tom had no idea the beans even existed, but as soon as he laid eyes on the box's Flavor Guide the wheels in his head began to spin. Just weeks later, Tom unveiled his first and most basic version of "The Bean Game" to friends at a campus party.

The rules were simple. Without looking, player #1 dumped one bean from the box into his hand. (If more than one bean escaped the box, player #1 put all but one of the beans back inside, again without looking. The punishment for looking was eating a second bean on that turn.) Then, player #1 compared his bean to the pictures in the Flavor Guide and announced the flavor to the group. Tasty flavors like lemon drop, tutti fruitti, and cinnamon were met with "awww, man!" and "lucky!", while disgusting flavors like sardine, grass, and earwax were met with "YES!!", "AWESOME!", and "I've never been so happy in all my life!". To wish a vomit bean on your opponents was part of the game, and let's just say that Tom played the game well.

After player #1 finished eating his bean, he passed the box to person on his left. The process repeated itself until all of the beans had been eaten.

You're probably thinking, what kind of deranged idiot would play such an distasteful (pun intended) game?! You'd be surprised. Over the years, Tom charmed hundreds of people - parents, grandparents, siblings, cousins, friends, enemies, wedding guests, and strangers at bars - into participating in The Bean Game.

Tom also uses a version of The Bean Game as a wager when betting against his brothers, sister, friends, and wife. My alma mater football team beat your alma mater football team? You eat a bean. I beat you at Uno? You eat a bean. I skunked you in Cribbage? You eat a bean. He may be a gentleman from time to time, but never when it comes to The Bean Game.
Over time Tom adapted The Bean Game to accommodate changes in bean manufacturing and to fulfill his desire to make the game more challenging. One of the newer rules, for example, is "no face, no chase", meaning that if a player makes a face or needs a chaser after eating a bad bean, they have to eat a second bean. Thank goodness "no face, no chase" was not yet in place during the above-mentioned Uno game.
The Bean Game plays favorites. Certain individuals - Tom's sister, Jenna, in particular - suffer tremendously, while Tom almost always emerges from the game unscathed. This unfair advantage becomes obvious to all who play with Tom, and over the years many have suspected him of somehow altering the game so that his taste buds receive the least amount of punishment. As payback, we've tried a number of different tactics - like hiding beans in his birthday cupcakes - to get him to accidentally eat a vomit bean. All have proved unsuccessful.
Over Christmas break Tom made a bet with his friend Tim about the Iowa Hawkeyes vs. LSU Tigers bowl game. If the Hawkeyes won, Tim would eat five beans; if the Tigers won, Tom would eat five beans. I rooted for the Hawkeyes with all my heart, but a tiny piece of me rejoiced when the Tigers came out on top because I really wanted Tom to have to eat five - hopefully bad - beans.
After all these years, The Bean Game finally turned its back on its creator. And that's alright, because I think The Bean Game's creator is about ready to pass the torch to the next generation.

After years of watching the game play out and perfecting his own "poker face", Will's ready to take the helm. He skunked his Grandpa while playing Cribbage and insisted that Grandpa eat a bean, and then a couple of weeks ago we introduced a few of his friends to the beans. He may be a gentleman from time to time - he may even hold an umbrella over her head and carry her backpack from time to time - but when Kaylee agreed to play The Bean Game Will couldn't resist yelling "no face, no chase!" while she chewed her booger bean. Like father, like son.
Posted by Chasing Roots at 6:00 AM