I think most of us have grown tired of winter. Many Southern states - most of which receive very little precipitation and even less snow throughout January, February, and March - have dealt with multiple ice and snow storms for which they find themselves dangerously unprepared. Many Northern states, even those that regularly operate with a "business as usual" mentality throughout the winter months, have reached their breaking points: schools have used all of their allotted (plus taken many more) snow/cold days, cities have exhausted their salt and sand supplies, and emergency responders have stretched their personnel, physical, and financial resources to their breaking point. Uncle, Mother Nature. UNCLE.

I find it almost comical that winter didn't bother me much when winter looked and felt like...winter. Until we moved to Texas, I understood and accepted that starting in late October and until late March, I wore a coat. I wore boots. I wore a hat, mittens, and a scarf. I bundled my babies before I took them outside. I started the car long before I actually had to pull out of the driveway. I shoveled snow before and after work. I paid an exorbitant heating bill every month.

But now, midway through my fourth (?!) Texas winter, I expect mild temperatures and clear skies. I expect the schools to remain open and my kids to go outside for recess. I expect light jackets and a fire in the fireplace on cool evenings to be enough. (And to be honest, I kind of feel like we deserve all that, given that our July, August, and September temperatures reach highs documented otherwise only on the sun.)

And so when Mother Nature throws Wisconsin-like winter weather and stormy skies my way, the anxiety sets in. When the schools close or delay, or when my kids - especially Will, who desperately needs to physically exhaust himself multiple times each day - aren't allowed to go outside for recess, I get grumpy.

For some reason the weather I loved as a Wisconsin, Iowa, and Michigan resident makes me not very nice here in Texas. I think I need therapy.

This is what the first half of January in Texas looked like: 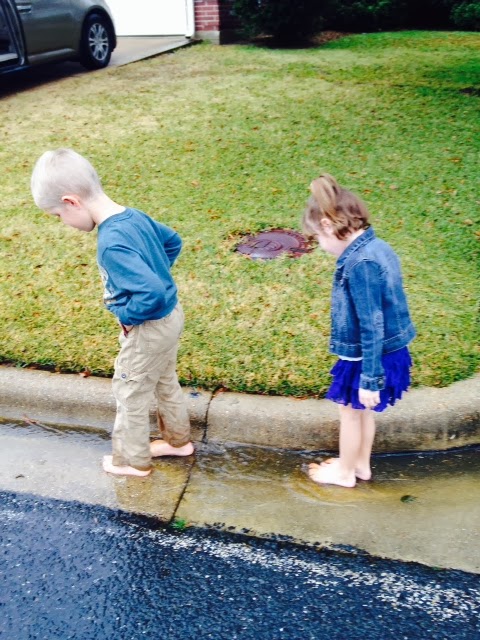 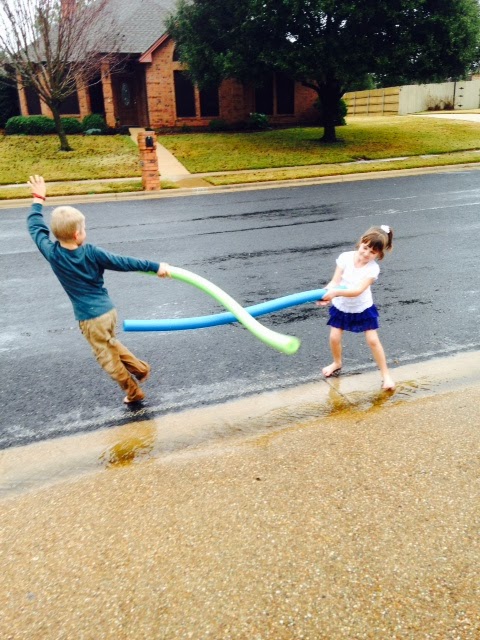 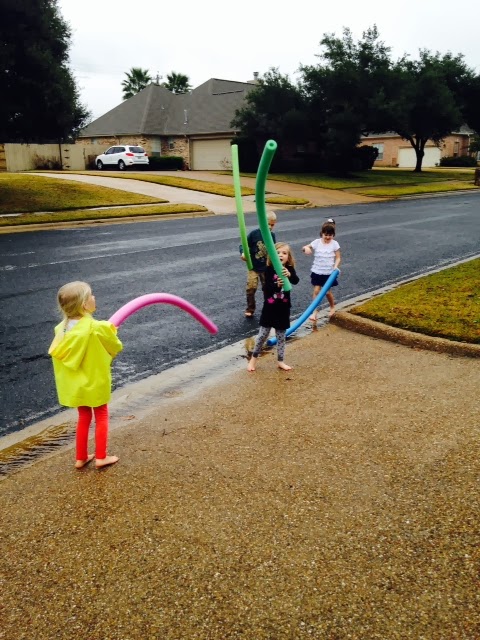 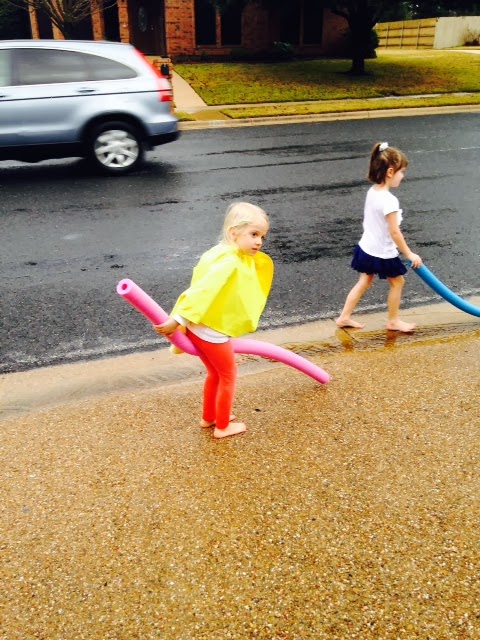 I may have worn pants and a light jacket on the day pictured above, but the weather was plenty warm enough for the kiddos to thoroughly enjoy the day's rain shower, accompanying street streams, and a good, old fashioned noodle battle.

And this is what the second half of January/first half of February looked like: 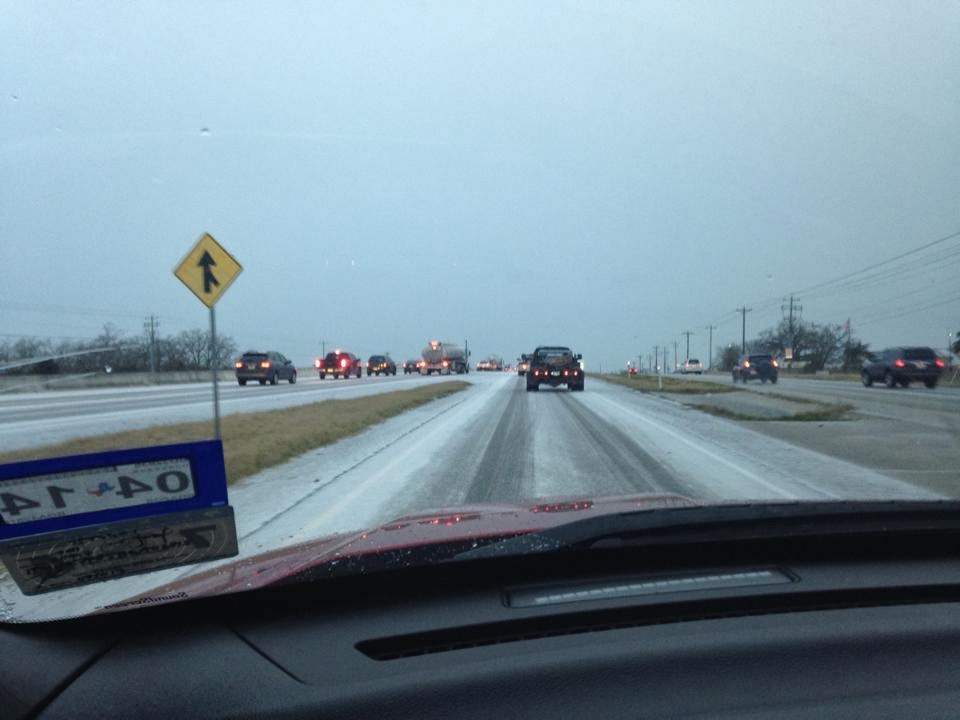 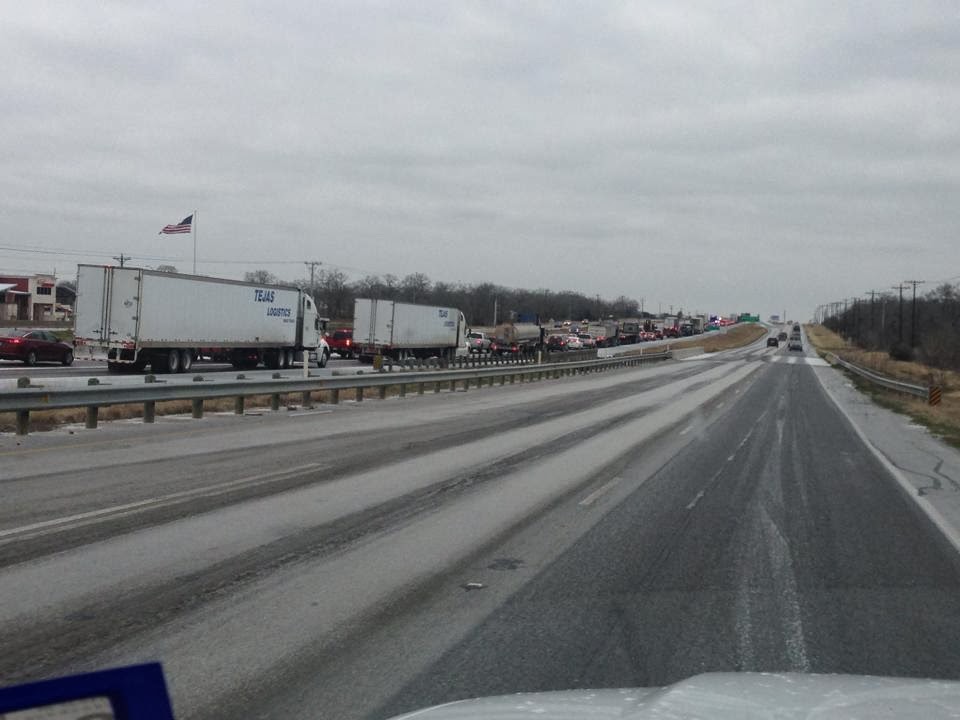 Temperatures in the low 20's with wind chills in the teens. Snow accumulation and sheets of ice on the roadways. (Made worse, of course, by the fact that in Texas, no one owns a shovel and the cities have no plows or sand/salt trucks.) Terrible back-ups on the highways and deadly accidents. No recess, school delays, and school closings.

Oh, the anxiety. Oh, the grumpiness. Last Thursday morning a snow and ice storm that should have triggered a snow day but somehow didn't (even Tom and I, who know how to drive in bad weather and on snowy, icy roads, thought school should have at least been delayed for two hours) made my morning awful. I was sitting in my car in the HEB parking lot - long story short, Hallie and I stopped to buy her a Lunchable because her backpack and lunchbox were in Tom's car - and I confessed to Hallie (poor thing, having to moonlight as her mama's therapist) that I felt like I was going to lose it. Sweet little girl, she smiled and replied, "it'll be OK, Mama. Just drive slowly on the ice and stay away from idiots on the road."

She then added, "and today is the best day EVER because I get to go to school AND have a Lunchable for lunch!"

I'm trying really hard not to let all this winter/weather nonsense get to me, and comments like those from my Hal Gal certainly help buoy me when I feel myself sinking. So do afternoons spent enjoying hot chocolate around the kitchen table and watching my boy brave the winter weather like a true Northerner. 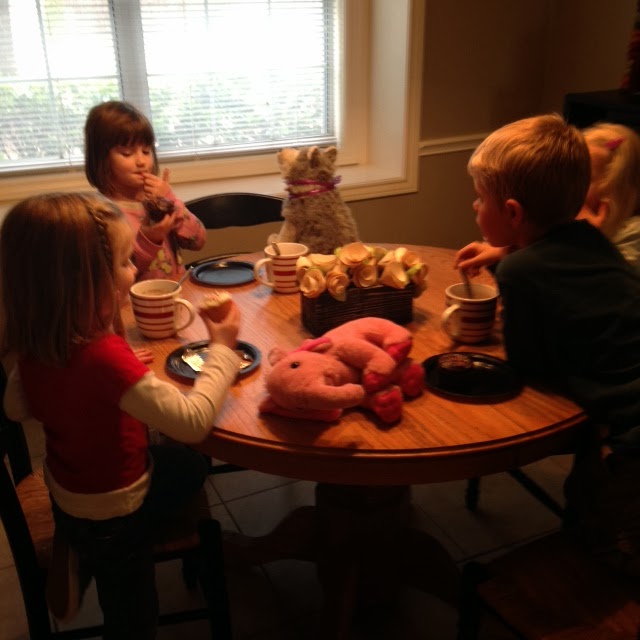 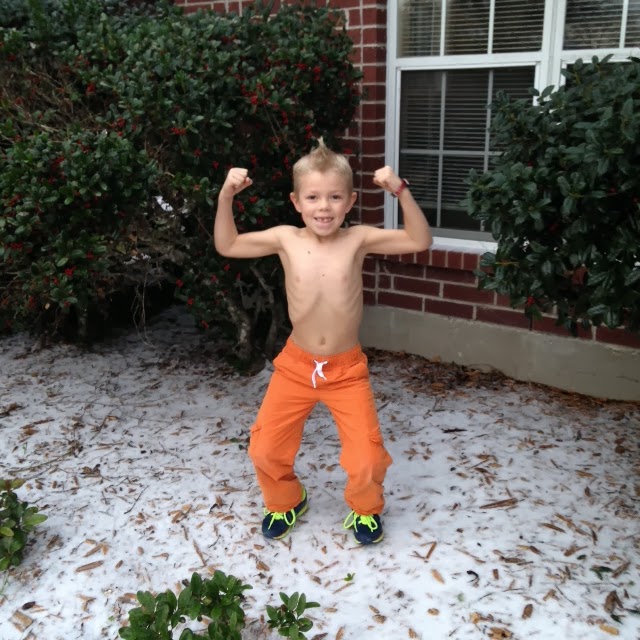 But that doesn't mean we're not ready for spring. Enough already, Mother Nature. ENOUGH.
Posted by Chasing Roots at 6:00 AM