Episode 2 in the "Tom vs." series (I'm not sure how Tom attacking tackling catastrophes and mishaps around the house turned into a series, but I've chosen not to ask questions that can't be answered and to just go with the blog-post flow) began when I heard Will, outside in the driveway with Tom and Hallie, yelling, "Yes! Good shot, Dad! Hit it again! Hit it harder!" I wasn't sure what I'd find when I walked out of the garage, and while I hoped Will's enthusiastic encouragement was sports-related, I couldn't rule out something far more dangerous. Like sword fighting with rakes. Or using the garden hose as a lasso. Sometimes it feels like only one adult lives in my house.

I breathed a sigh of relief when I saw that the problem was relatively minor (at least in comparison to what went down with our toilet): Tom had thrown the Beamo - basically a huge Frisbee - into the tree and it had stayed there. But I sucked that sigh of relief right back in when I saw Tom attempting to dislodge the Beamo by hurling a metal baseball bat into the tree. Both kids were standing nearby, completely unaware of how badly getting hit on the head with a flying metal baseball bat would hurt, and Tom's car was one bad bounce on the driveway away from a broken window. 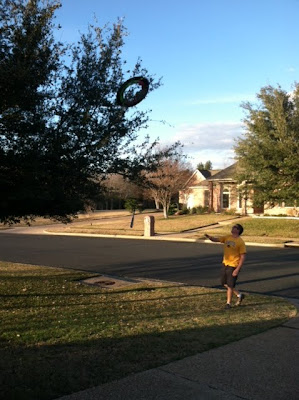 When the baseball bat didn't work (and after was a near miss with the car), Tom tied a rope to a baseball glove with the goal of throwing the glove through the Beamo, catching the edge of the glove on the Beamo, and then pulling the Beamo down. It was a good idea in theory, but the Beamo stayed put and we very nearly lost the glove to the tree as well. 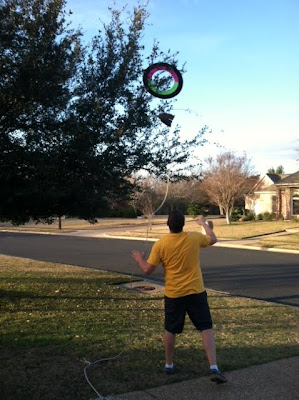 According to Tom, the glove didn't work because it wasn't heavy enough. So what did he opt for next? A wrench. I immediately ushered Will and Hallie into the shelter of the garage, where I assumed they'd be safe from flying wrenches. (They were.) 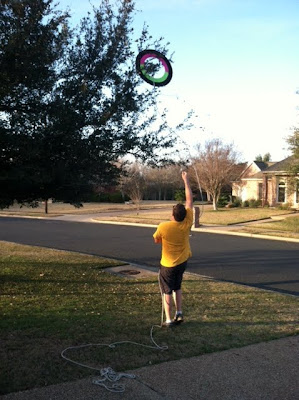 The wrench actually worked quite well - it sailed through the center of the Beamo and caught on the edge, just like Tom had planned. And then he just pulled like crazy, until the Beamo basically popped out of the tree. 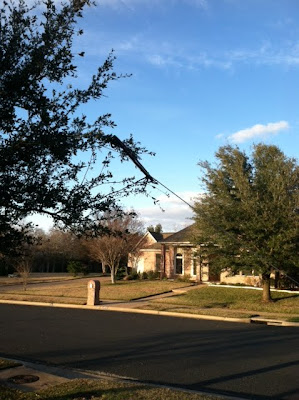 And just like when he successfully tackled the toilet, Tom struck his rockstar pose once again. 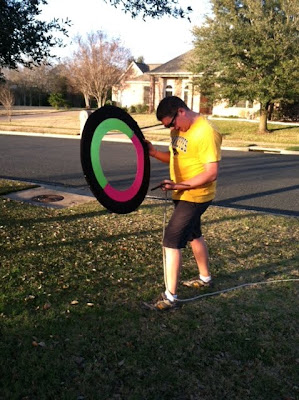