Though we couldn't have cared less about who won the Super Bowl, the day was none-the-less super.

As has become our tradition, we sported our Green Bay Packer attire in protest of the fact that Aaron Rodgers and his Pack hadn't made it to the big game. 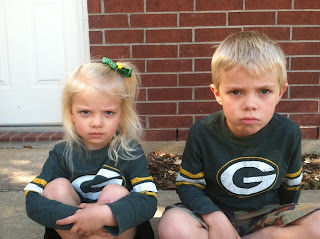 (Here's last year's protest photo. I think they've both improved their protest faces over the course of the last 12 months.) 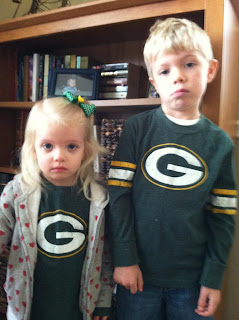 With friends, we drank beer; ate delicious grilled chicken, corn on the cob, chorizo, guacamole, and banana bars; ranked the commercials; rocked out with Beyonce; and competed against one another in our annual Super Bowl predictions tournament. Tom, Aaron, Kendra, and Hallie tied for first place. 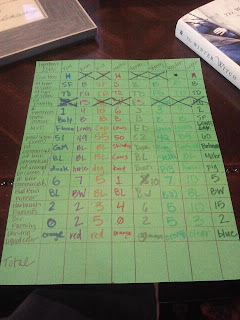 Oh, and we watched the game too, though not very attentively, especially after the blackout.

But the most special part of the day came earlier in the afternoon. Since the day we found out we were having a boy, Tom has dreamt about playing catch with his son. For a while - a LONG while - it looked like that day would never come. First, Will wasn't interested in baseball. Then, once he grew to love the sport, Will was happy to practice batting but wouldn't play catch because he was terrified of being hit by the ball. And then, after he'd for the most part outgrown his fears, Will just wasn't interested in playing with Tom.

Midday on Super Bowl Sunday we walked to the park, sports gear in tow, for a little exercise and fresh air. Tom somehow convinced Will to throw the ball back and forth (I think Tom bribed him, and promised Will that he could go play on the playground after 10 throws) and in the next few minutes, something clicked. They were throwing the ball back and forth - Will throwing balls that Tom could actually catch and catching balls that Tom threw in his direction - like it was the most natural thing in the world.


It really was Tom's dream come true.
Posted by Chasing Roots at 6:00 AM