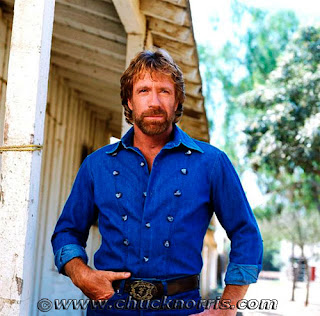 Hallie takes a weekly gymnastics lesson at a local gym. She loves the class, and I enjoy the 45 minutes I get to spend chatting with two friends of mine whose little girls are in Hallie's class.

A couple of weeks ago, as I got out of my car in the gym parking lot, one of my friends mentioned that she'd just seen a man who looked an awful lot like Chuck Norris walk into the building.

"Do you think it's possible it was really him?" she asked.

"I have no idea - does he live around here? I suppose it's possible..." I replied.

We decided to further scope out this stranger once we got inside.

A few minutes later, once the girls had joined their teachers and classmates on the floor to stretch, Jamie, Erin, and I started our investigation.

First, I walked over to where "Chuck" was sitting and while pretending to watch Hallie stretch, checked him out. He was watching gymnastics with a lovely blond woman, and was wearing a black hooded sweatshirt and a baseball cap which unfortunately made it difficult to identify him as Chuck or just a stranger resembling Chuck. I headed back to where Jamie and Erin were sitting and asked if they'd mind if I just yelled "Chuck!" at the top of my lungs to see what played out. They minded a little, so I didn't go that route.

Second, we noticed that "Chuck" was drinking from a Starbucks cup. We figured that the name written on the side of the cup could be our next clue, so we once again pretended to watch the girls stretch until we could read the name on the side of the cup. (For all the pretending to watch the girls we did that day, I didn't see a single minute of Hallie's gymnastics lesson.)

Of all days for "Chuck" to be enjoying his wife's beverage.

But then we realized we had smart phones - smart phones that would allow us to look up information about and images of Chuck on the internet. One of the first pictures we came across was of Chuck at some kind of fundraiser or event, standing next to his wife...a lovely blond woman named Gena.

At that point we were pretty excited, seeing as we were not even 15 feet away from the man who has counted to infinity...twice.

Finally, because we needed to seal the deal, a friend of Jamie's - who was much gutsier than any of us - just walked over to "Chuck" and asked him if he was Chuck. "Chuck" confirmed that he was Chuck. She asked Chuck if she could take his picture, but he said no because he was there watching his grandkids and they don't like it when he draws attention to himself at gymnastics. He shook her hand though. Pretty awesome.

So in conclusion, a family member of Chuck Norris' takes gymnastics with Hallie and he comes to watch. Often. I can't wait until next Monday!

I'd like to leave you today with a few facts about Chuck Norris.

- Chuck Norris has already been to Mars. That's why there are no signs of life there.

- The only mind Edward cannot read is Bella's. That's because Bella only thinks about Chuck Norris.

- Chuck Norris is spelled with a silent "awesome".

- Ghosts sit around the campfire and tell Chuck Norris stories.

- When the Boogeyman goes to sleep every night he checks his closet for Chuck Norris.

- When Chuck Norris does a push-up, he's not pushing himself up, he's pushing the Earth down.
Posted by Chasing Roots at 6:00 AM