An Apology to the Twihards

On Monday, July 23rd, I wrote:
The last books I'd heard described as young adult fiction were those in the Twilight series. I tried to read the first Twilight book and watch the first Twilight movie (were they both called Twilight? I have no idea), but both made me want to jam a pencil into my eye. I still ponder what I could have done with the hour I lost watching Edward and Bella sulk around their dreary high school cafeteria. Probably something amazing. Like laundry.

On Tuesday, August 21st, I posted: 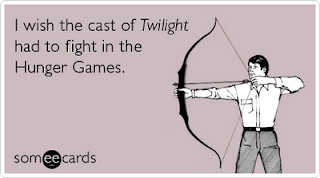 Two weeks ago I spent the weekend with my mom and sister, and over dinner one night my sister explained to me the entire Twilight saga. From beginning to end, she covered every character's backstory, every plot twist. If I'd planned to read the books or watch the movies, I wouldn't have asked or allowed her to do this, but since I had absolutely no intention of ever again attaching myself to either, Twilight seemed like good dinner conversation. 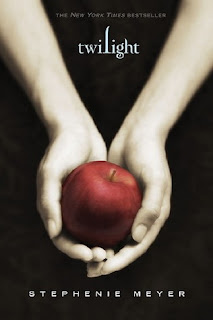 When dinner was over, I found myself - much to my dismay - completely intrigued. So much so that when I returned home, I mentioned to a Twihard (a diehard Twilight fan = Twihard) friend of mine that I was possibly maybe considering trying to watch the movies. She was beyond excited, and the next day she brought me her copies of the first four movies. This was incredibly generous of her, because next to her children, her Twilight movies are her most prized possession.

Tom joined me for bits and pieces of the movies the first time around, and Tom, my sis-in-law, and her boyfriend all joined me - of their own freewill - the second time around. Somehow I became the one explaining the more complex plot twists and answering their questions, and I was shocked when I suddenly cared enough about the story to stand up for Team Edward against my sis-in-law's boyfriend who is 100% Team Jacob.

Even now, I can't believe I just typed Team Edward and Team Jacob. What has become of me?!

I'm headed out to see the final movie in the Twilight Saga - Breaking Dawn Part 2 - next week, and I'm planning to read the books over Christmas vacation. I may not consider myself a Twihard (Hunger Games is still my #1 YA fiction series), but I've definitely become a huge fan despite my best efforts to stay as far away as possible away from Bella, Edward, and Jacob.

So my apologies, Twihards, for all of the mocking comments I've written/said and pictures I've posted. This girl's been changed.
Posted by Chasing Roots at 6:00 AM