I wore my mom's class ring throughout my first two years of high school, both on my right ring finger and on a chain around my neck, so when my parents bought me my own at the end of my senior year they assumed I'd wear it all the time and for years to come. They were wrong.

I honestly think I wore my high school class ring twice, and a few years ago I traded the ring in to alleviate the cost associated with a few new pieces of jewelry I had made from a ring of my grandmother's.

When the time came to purchase a class ring from the University of Iowa, my parents literally rolled their eyes at me as if to say, "we're no dummies, Erin". I may have made a stink (though I can't actually remember), but they made the right decision; at the time I didn't know a single person who wore, or even bought, a college class ring and I certainly didn't feel like I was missing out by not having one on my finger.

Until we moved to College Station, that is.

I didn't notice the rings at first, primarily because none of TAMU professors and spouses with whom we initially interacted had attended TAMU or were even from Texas, for that matter. It wasn't until the fall of last year, while I was sitting in a training at Will and Hallie's school, that I noticed the exact same ring on the fourth finger of the right hand belonging to at least 3/4 of the women in the room with me.

And so just as I've done each time I've encountered a new TAMU tradition that I wasn't familiar with or didn't fully understand, I started my research. 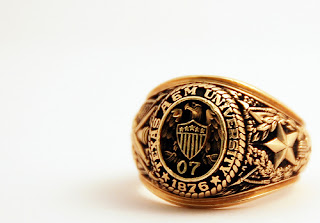 Apparently the Aggie Ring - available to current TAMU students who have completed 90 hours toward their degree and are in good standing with a GPA of at least 2.0 (the criteria is different for graduate students) - is one of the most symbolic TAMU traditions. The tradition began with the Class of 1889, when E.C. Jonas (class of 1894) designed the first version of the Aggie Ring. There have only been slight changes to the ring over the years (rounding off the originally square corners because the corners kept ripping students' pockets, for example), with the exception of a more significant change in 1964 when the Texas Legislature changed the name of the university from the Agricultural and Mechanical College of Texas to Texas A&M University.

According to the TAMU Traditions Council website and the Association of Former Students Aggie Network website, the ring's design represents the values - excellence, integrity, leadership, loyalty, respect, and selfless service - every Aggie should hold:
- The large shield on the top symbolizes an Aggie's desire to protect the TAMU reputation.
- The 13 stripes on the shield represent the 13 original states of America.
- The five stars on the shield refer to an Aggie's phases of development: mind/intellect, body, spiritual attainment, emotional poise, and integrity of character.
- The eagle represents agility, power, and the ability to reach great heights.
- The star on one side symbolizes the Seal of Texas and is encircled with a wreath of olive and laurel leaves that symbolize achievement and a desire for peace.
- The oak leaves symbolize the strength to fight for the United States and the State of Texas, and the leaves are joined by an encircling ribbon to show the importance of uniting the country and the state to accomplish one's ambition to serve.
- The ancient cannon, saber, and rifle on the other side symbolize how citizens of Texas fought for their land and are determined to defend it. The saber stands for valor and confidence, while the rifle and the cannon stand for preparedness and defense.
- The crossed flags of the United States and Texas recognize an Aggie's dual allegiance.

According to tradition, current students wear their rings with their class year facing toward them as a way to signify that their time at TAMU is not yet complete. During the Senior Week Ring Dance, students turn their rings around to show that they - now Aggie graduates - are ready to face the world.

I'm told that many students spend the night outside the Association of Former Students building the night before Ring Day because they want to place that ring on their finger as soon as possible. Hallie and I may take a drive through campus the next time Ring Day rolls around so we can see these eager students ourselves.

I've also learned a little about an unsanctioned and unofficial (and apparently discouraged by TAMU and local medical professionals) tradition among TAMU students called "Ring Dunking": a student drops their newly-acquired Aggie Ring into a pitcher of beer, chugs the entire pitcher, and then catches the ring in their teeth. This tradition began in the 1970s when a Corps of Cadets member accidentally dropped his ring in his beer and figured chugging what was left in his glass was the best way to get his ring back. Word spread - though unofficially, as the bar in which the first dunk took place never advertised - and the tradition was born. It's actually a pretty big deal for some people; parties are thrown in honor of and siblings, parents, and extended family members (especially those who are Aggies themselves) come into town to witness ring dunks, and there's even a "How to Dunk Your Aggie Ring" tutorial posted online on eHow.

Here are a few pics of Aggie rings belonging to friends of mine here in College Station, as well as a couple of pics of interesting versions of the Aggie Ring that I found on the internet:
Last Friday was one of the three Ring Days held throughout the school year (Hallie and I missed out), so congratulations are in order for all of the Aggies sporting new jewelry this week!

A special thanks to Amy, Margo (and Sophia and her Grandpa), Michelle, and Jeni for their contributions to this post!
Posted by Chasing Roots at 6:00 AM