While College GameDay has visited all of my college towns (I maintain allegiances to the Universities of Iowa, Wisconsin, Michigan, and Nebraska) in the past, Kirk, Chris, Lee, Desmond, and I have never actually been in the same town at the same time.

Until last week, that is, when GameDay arrived in College Station for the TAMU vs. Florida game. Tom and I decided the spectacle was something we wanted to experience for ourselves and also wanted our kids to be able to say they'd seen, so we dressed in our Aggie finest and headed to campus with plans to catch the last 45 minutes of the broadcast. (There was no way we were waking the kids up before dawn to stand for hours in a sweltering field surrounded by mildly inebriated college students covered in body paint.)

The experience was everything we could have hoped for: the crowd was friendly and welcoming, we were able to see all of the GameDay stars (including the Yell Leaders and Reveille, who were much bigger deals to the kids than were those guys behind the desk), it was only semi-unbearably hot standing around in that field, and last but certainly not least, the kids MOSTLY behaved.
After the GameDay broadcast wrapped we headed a couple blocks closer to the stadium to Tom's department's tailgate party. The tailgate location (about a block from the stadium) and set-up (a huge tent with cooling fans, comfortable lawn chairs, endless BBQ chicken and brisket, cold beer, and a huge, flat screen television set) were more than we deserved, especially with our kids in tow, and made us feel like we were kind of a big deal.  Which we are not.  Our kids make sure we're well aware of that fact each and every day.

And while the tailgate reminded Tom and me of those we used to drool over (as in, "someday we'll make enough money to host that kind of tailgate") on our way to University of Iowa games so many years ago, it also made us miss our old tailgates, the ones that started at 5am and where we served cheap beer, listened to the radio, and played mustard bowling. We're going to tailgate like that again someday, maybe with Will when he's in college. He'll love that.

About a half hour before kick-off we started walking back to our car. As luck would have it, our paths crossed with the Corps of Cadets Parson's Mounted Cavalry (the only mounted ROTC unit in the country), who had just left the stadium. It was fascinating to see them in a few of their formations, and it was even more incredible that they let the kids come up and feed and pet the horses after they were finished with their work.
As we were finally walking away from the horses, a man walked past us wearing an Iowa State jersey. 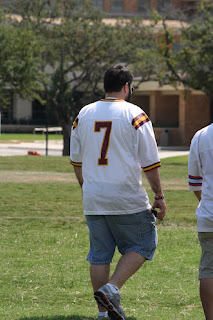 This made absolutely no sense, as Iowa is really far away from Texas, and Iowa State and Texas A&M aren't even in the same conference anymore.  That didn't mean we could ignore this guy, however, so Tom and I quickly told Will to yell "Go Hawks!" at the top of his lungs.  He obliged, though he had no idea why he was yelling (he's a reasonably sharp kid, and was well aware of the fact that he NOT at an Iowa game).  The guy turned around, realized the cheer had come from Will, and laughed; we all all yelled "Go Hawks!" again and headed home.  To watch the Hawks lose to Iowa State.  Karma, I suppose.

At least I got to see Kirk and Lee.
Posted by Chasing Roots at 6:00 AM