It's Official - She's a Texan

Assuming our first official day as Texans was January 1st, 2011, as of today we have lived in Texas for 631 days.

Our first official day as Texans is kind of up in the air, seeing as in December 2010 we spent a couple of nights in Texas hotels, moved some of our belongings into our rental house, spent a couple of nights in our rental house, drove back to the Midwest for a week and a half, and then rounded out the month by driving back to Texas in time for New Years. Tom started his job at TAMU on January 1st so I've decided to go with that date.

Before we moved to Texas and assuming her last day as a Michigander was December 31st, 2010, Hallie lived in Michigan for 631 days.

So that means that as of tomorrow - September 21st - Hallie will have lived more of her life in Texas (632 days) than in Michigan (631 days). I think that fact makes official her status as a Texan.

And if living more than half her life in Texas didn't do it, the fact that she asks for a jacket when it's 80 degrees outside certainly does. 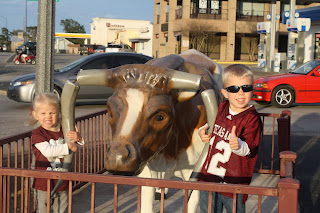 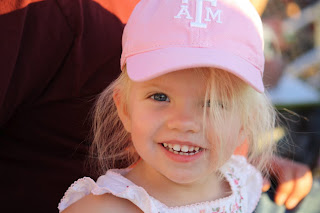