...as in, the first time Hallie publicly insulted her mother. (Unless you count tantrums as insults, which I sometimes do because I feel pretty insulted when Hallie melts down in Target and I have to drag her - literally kicking and screaming - from the store and through the parking lot to our car.)

Hallie was standing on a stool and I was standing behind her, both of us looking straight ahead into the bathroom mirror while I worked on her hair. I had just finished up the second of her two braids when this conversation took place.

Hallie: You are SO beautiful!

Erin: Thank you, Hallie! That's so nice of you to say.

Hallie: I WASN'T talking to YOU.

Hallie: I was talking to my french braids. 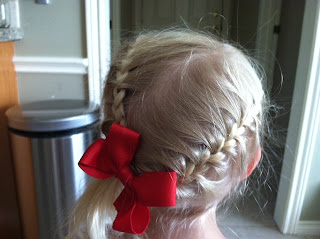 Ok, that insult wasn't entirely public, as it happened in our house. I made it public though, because I told pretty much every teacher at Hallie's school what she said to me. Now this one...this one's legitimately public.

Hallie: You have a REALLY big nose, Mama.

Hallie: Let's talk about it, A LOT, and loudly.

Which she did, for the next three minutes.
Posted by Chasing Roots at 6:00 AM