Back in June - when I assumed our gardening efforts would translate into gardening success - I had every intention of focusing on tomatoes for my summer Kitchen Challenge. I honestly thought we'd be eating tomatoes for dinner every night and that I'd be sneaking tomato puree into muffins and brownies in an attempt to use the tomatoes before they went bad.

If you stop Midwestern Girl here regularly, you know that this year's garden didn't exactly go as planned. Which means my summer Kitchen Challenge didn't go as planned.

Without baskets full of fresh tomatoes crowding my countertops, I wasn't at all inspired to cook with tomatoes. So I dropped my commitment to them all together and decided to simply make/bake one new recipe each week throughout the summer months. I did well in late June, August, and September, but July was a wash because we were in Wisconsin and most of the time my mom cooked for us.

There were a few busts - either because I did something wrong or because the dishes just weren't ones we enjoyed - but there were also a few really great successes that I wanted to share. I hope you enjoy! (I often make adjustments to recipes and I included those adjustments so you have the option of going with the original recipe or trying my adaptations.)

1. Cinnamon French Toast Bake
- Adaptations: I left out the nuts (Will's allergic so we don't feed nuts to either Will or Hallie) and skipped both the powdered sugar and the maple syrup.
- Verdict: Even Hallie took a few bites, which she only does if a dish is amazing. 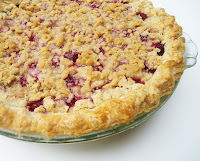 2. Raspberry Crumb Pie
- Adaptations: I used Kroger-brand, pre-made pie crust instead of making a pie crust from scratch. I can't stand making pie crust.
- Verdict: This pie was unbelievable. I made it on a Friday afternoon and Tom and I ate the entire thing (yes, just the two of us) by Sunday afternoon. And then I did back-to-back classes at the gym on Monday morning to make up for it. 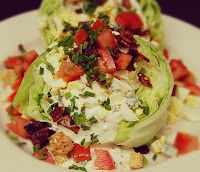 3. Maggiano's Baby Wedge Salad
- Adaptations: None
- Verdict: The blue cheese dressing on the salad was divine, and I'm certain it would have been even better if I'd made it ahead of time, like the recipe calls for. Plan ahead on this one!

4. Crockpot Pot Roast
- Adaptations: I used beef broth instead of water, left out the celery (I strongly dislike celery), and added 1 c. of sliced mushrooms with about an hour left to cook.
- Verdict: The meat and vegetables were tender and the sauce was flavorful, but I'd probably cut this recipe in half for our family of four next time around.

5. Southwestern Chopped Chicken Salad
- Adaptations: For the salad, I added 1 diced red pepper, used romaine lettuce instead of iceberg lettuce, and left out the cilantro (Tom thinks it tastes like soap) and tortilla chips. For the dressing I used 1/3 c. mayo, 1/3 c. nonfat plain yogurt, and 1/3 c. ranch dressing.
- Verdict: LOVE. And if you dress the salad lightly, it's pretty darn good for you.

6. Abuelo's Papas Con Chile
- Adaptations: I went a little lighter than the recipe calls for when it came to the cream cheese, heavy cream, and Velveeta and I left out the jalapeños all together. (Don't tell Tom that this recipe was supposed to have jalapeños in it.)
- Verdict: We were well aware of the fact that what we were eating was clogging our arteries, but boy, was it good. We ate (tried to eat) small servings.

7. Spinach Artichoke Dip
- Adaptations: I used 2 T. of butter (each time), frozen spinach, one can of artichokes, skim milk, 4 oz. of cream cheese, 3/4 c. feta cheese, and 3/4 c. parmesan cheese, and I left out the pepper jack cheese and cayenne pepper.
- Verdict: My adaptations, of which there were quite a few, certainly didn't affect the taste of this dip - it was as good a spinach artichoke dip as I've had in any restaurant and I'll definitely make it again (though next time I'll either half the recipe or make it for a group).

8. Pumpkin Snickerdoodles
- Adaptations: My heart was already set on making these cookies when I discovered I was out of white granulated sugar, so I decided to just substitute brown sugar. For the cookies I used 1 and 1/4 c. brown sugar instead of 1 c. granulated sugar and 1/2 c. brown sugar. For the coating I used 1/4 c. brown sugar. Also, instead of rolling the dough balls in the coating mixture and then flattening the balls, I flattened the dough balls and then sprinkled them with the coating mixture.
- Verdict: These cookies were simply scrumptious, and both Tom and I agreed that they were just the right level of sweetness thanks to the brown sugar (and using a little less sugar than the recipe called for).

9. Honey Beer Bread
- Adaptations: I didn't pour any melted butter into the pan and only used 2 T. of melted butter on the top of the loaf. I also used honey (instead of agave nectar) and Shiner beer.
- Verdict: I could have eaten the entire loaf in one sitting. I didn't, but I could have.

So there you have it - the (positive side of the) results of my summer Kitchen Challenge. I have zero ideas for fall, so if something comes to mind, please share!
Posted by Chasing Roots at 6:00 AM