Writing
I spent much of March in front of my computer, working on a few new projects. Most won't come out until fall or even the holiday season - that's how far in advance magazines prepare for upcoming issues - but I'm excited about all of them and I promise to share as they become available in print and online!

Reading
I finished the The Handmaid's Tale, and as much as it pains me to write this, I didn't like the book AT ALL. I read through to the last page because I plan to watch the Hulu television series at some point in the near future, but at the end of every chapter I considered returning the book to the library. A friend - who also read and disliked the book - assured me the television show is MUCH better...I'm holding out hope!

Hallie and I continue working our way through Wonder. I thought we would have finished it by now, but as it turns out, we both feel the need to stop and talk about August and Via after almost every chapter. I expect the author intended - at least in part - to provoke conversation about kindness, acceptance, and inclusion, so I think we're using the book the right way!

I don't have a new book on my nightstand for April (all those I checked out from the library came due while I was trudging my way through The Handmaid's Tale) - any suggestions?

Watching
Y'all, I can't get enough of The Greatest Showman. I saw the movie again, this time with Will. I can't wait for it to come out on Blu-ray so we can watch our favorite scenes on the biggest of our small screens.

We watched three documentaries in March. First, we enjoyed tremendously the first two episodes of the Netflix Docuseries Rotten. All four of us liked the first episode, Lawyers, Guns, & Honey, but only Tom and I lasted all the way through The Peanut Problem; the peanut allergy topic hit a little too close to home for both Will and Hallie and they opted to read while Tom and I finished up the episode. Consider this series highly recommended!

Second, we watched Ghost of the Mountains, a documentary about the elusive snow leopard...elusive being the operative word. Snow leopards appeared onscreen for less than 20% of the film's 78 minutes. We tried as hard as we could to stay focused, but all four of us eventually lost interest in watching the filmmakers search - usually unsuccessfully - for their subject. This documentary was definitely not Disney's best work - I would give it a C at best.

I found two new podcasts to listen to this month. First up, For the Love with Jen Hatmaker. "For the love of ... People. Home. Stories. Shoes. Family. Jesus. Community. TV. Accessories. Food." Jen invites listeners to join her and a wide variety of guests as they talk about all of the things she/they/we love(s). I started with Episode 5: Eat Cake & Be Brave: the Funny Formula for Life with Melissa Radke, which was part of the For the Love of Laughter series, and I'm looking forward to pulling up the episodes in which Jen interviews Emily Ley and Glennon Doyle and the episodes that focus on the Turquoise Table movement and holiday gift giving. Second in line, This is Love. Produced by the team that puts out Criminal, a favorite podcast of mine, This is Love is "an investigation into life's most persistent mystery". The first episode talked about spiders and sounded awful, but I gave it a try anyway and found myself almost immediately drawn in to its web. I definitely recommend both podcasts! 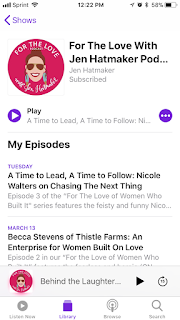 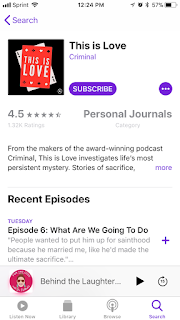 Trying/Using
About a month ago we put this piece of furniture - designed to collect both trash and recycling side-by-side - in our kitchen/dining room. While we did fine with trash, we didn't have a great system for getting our recycling from the kitchen to the large recycling bin in the garage and thought this piece might help us streamline this area of our lives. After five or so weeks, the verdict is in...we love it! If you recycle and need a neat and tidy way to collect your recyclables in your house, give Sawdust City LLC's products (they offer a few different styles) a try! 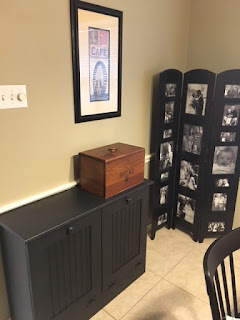 I have no affiliation with Sawdust City. We're just happy customers!

Wearing
I just bought these earrings for $8 - yes, only $8 - from For the Love of Wood here in College Station. They're gorgeous and well-made and light as a feather, which is perfect for me because my earlobes can't handle heavy earrings. Check them out on Facebook (as far as I know, that's the only way to shop) here!
Again, no affiliation - just a happy customer!

I continue to struggle with my United States of Cookies kitchen challenge. So many of the recipes call for nuts as a primary ingredient, and for Will's safety and my piece of mind, I just can't bake with certain nuts in my kitchen right now. And many of the other recipes - I hate to say this - just don't appeal to me. If I'm baking cookies I want to know we're all going to enjoy them, and with some of these recipes I honestly wonder. I'm hoping to get back to this series down the road, but it's in something of a holding pattern right now.

I haven't written a Restaurant Update post in a while, but we are still working our way through Spoon University's list of 45 Places to eat in College Station Before You Die. The going is slow, but we're committed to this one!