Writing
This month I finished and submitted two holiday-themed articles for Texas Living, and even though Christmas is still eight months away, all that writing about twinkling lights and evergreen trees and photos with Santa has me itching to sing along to my favorite Christmas music...

Next up I'm tackling a few pieces about museums in our region, as well as a Mama Bear self care post about easy but effective essential oil recipes.

Reading
I started - and quickly finished, because I couldn't put it down - The Couple Next Door. I can't say much about the plot, characters, or ending without giving away important details, so I'll leave it at this: if you like mysteries, suspense, and twists and turns that keep you on your toes until the very last page, this book is for you.

Our library is under construction in the most frustrating way - the inside, outside, parking lot, and drive-thru book return are all affected and the entire building closes unexpectedly - so we haven't checked out any new books in about six weeks. Hallie and I tried to go last week, both to return our last round of books and check out new books, but the building was once again closed unexpectedly...we're getting desperate!

Watching
In April we caught a couple of episodes of the Netflix docuseries 72 Cutest Animals and Nature's Weirdest Events. Neither were particularly riveting so I don't think we'll be back for future episodes, but we awwed at a few cute baby animals and ewwed at a few disgusting animals. Hallie lost interest midway through watching tiny crabs overrun a village and ended up getting carried to bed when the episode finished. 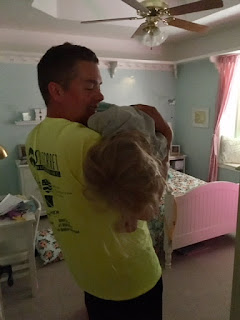 Beyond that, I haven't had the opportunity to watch anything new - large or small screen - this month. I'm looking forward to the slower days and more relaxed evenings of summer for a plethora of reasons, one of which is once again having the time to snuggle up on the couch and watch movies with my family.

Listening To
Concert/recital season has arrived, so when the kids are home I find myself listening to either cello concert pieces or dance recital music. When the kids aren't home, I listen to silence on good days and the construction occurring at one of our neighbor's houses (which has been going on for nearly six months) on bad days. I don't understand how construction crews can build an entire house in a couple of months but they can't finish renovations on the home across from us in half a year...

On a related note, Will taught himself the songs from The Greatest Showman on the cello. I love listening to him figure out the music on his own and then play along while we watch the movie (for the fifth or sixth time). 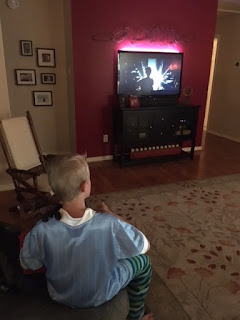 I've mentioned previously how much I enjoy the Mama Bear Dares podcast, and today I wanted to share with you a few episodes I found particularly insightful, informative, and interesting. When you have the time (each episode lasts more than an hour), check out #159: Parenting Teens, #150: Mama Bears & Money Management, #147: Screen Time, and #140: Love & Chores.

Trying/Using
My kids like to sleep with sleep masks on, because they also like to fall asleep with the lights on. I find this ridiculous (and I of course turn off the lights as soon as they've dozed off), but thanks to Grandma they're sleeping well in their adorable and surprisingly high quality sleep masks.
Here's a link to Hallie's. (I can't find the link to Will's right now - I'll share later.)

Also thanks to Grandma, I have a brand new set of the most fun coasters EVER. 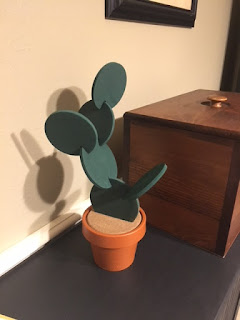 When stacked together those little green circles create an adorable cactus, but they also come apart to be used as coasters. When the meal is finished, the coasters can be reassembled as a different cactus. Need your own set? Here's the link!

Wearing
So I'm not wearing these pants, but Hallie is and she's loving them. Cat & Jack at Target sells them in black, navy, and army green and they're comfortable, cute, washable, and dry-able. Hallie has reached a difficult age to dress... She still adores frilly dresses and ruffly leggings, but she also likes wearing athletic clothes that make participating in PE, playing at recess, and cruising the track during runners club easier. She's also only about a year away from leaving elementary school and moving up to intermediate school, at which point I imagine her clothing choices will change slightly. And because she doesn't grow quickly, I don't want to buy lots of frilly dresses and ruffly leggings now that she won't outgrow before she doesn't want to wear them anymore. Long story short, these pants are a perfect solution to this clothing dilemma.
And now, if you'll excuse me, I'll be crying in the corner about how my baby is just a year away from finishing elementary school and (probably) bidding farewell to frilly dresses and ruffly leggings.

For years I have worn Mizuno athletic shoes exclusively. They cost too much, however, so I only buy them when they come up on Zulily. Unfortunately, Mizuno hasn't appeared on Zulily in months and my current pair has holes in them, so I had to cave and buy a pair of non-Mizunos. I picked out these Adidas running shoes - I wore Adidas all the time as a high school soccer player, so the brand isn't completely foreign to me - at DSW and while I'm still wearing them around my house with the tags on, I think they're going to be a good fit. And they're cute! 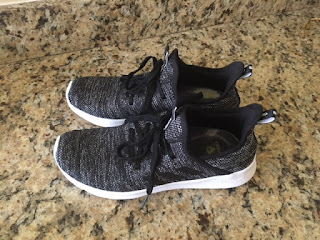 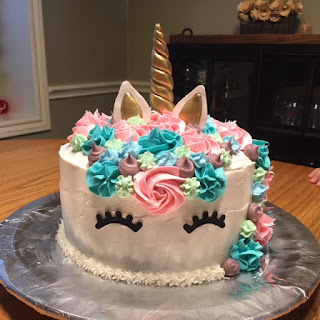