One
Every year the third graders at the kids' elementary school take a field trip to Camp Allen to learn about nature, conservation, entomology, and reptilian animals. Because I can't stand insects and reptiles, when Will was in third grade I opted to sit this particular field trip out - the only time I have ever done so since my kids starting going on field trips. But now I'm feeling the speed at which Hallie is growing up, so I decided to tough it out as to not miss this experience with her.

The day ended up being one of the best we've had. The meteorologist predicted thunderstorms, but it didn't even rain. Hallie loved all of the lessons and the animals...my girl who won't catch a teeny, tiny lizard in our house held a huge snake and giant bearded dragon. And perhaps most notably, I TOUCHED A SNAKE. Just for a second (though long enough to snap a picture) and only on its back and when its head wasn't in view, but I did it. I have my friend Jenn to thank - she texted me and said she'd take me to lunch the following day if I touched the snake, and apparently that was all the motivation I needed. A wine bribe might have even gotten me to hold it... 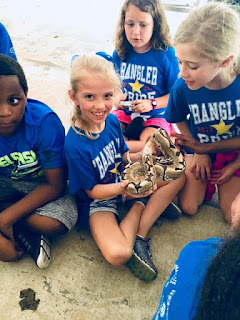 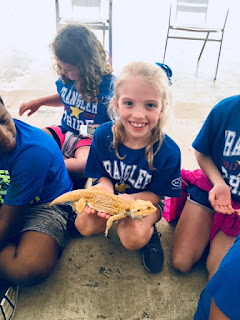 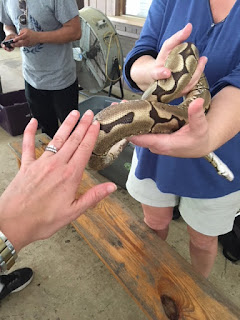 On the way home Hallie and I made a couple of stops, including one for ice cream. Some days I wish more than anything that I could slow down Father Time... 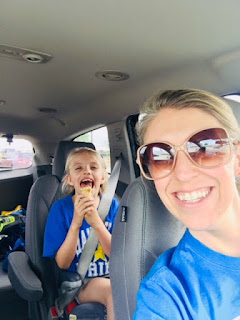 Two
On Friday night Will and I attended the A&M Consolidated High School (his future high school) men's soccer playoff game. We sat on those bleachers, just the two of us, for hours, eating popcorn, talking about soccer, and cheering for our team. At one point Will spotted a couple of his Cavalry teammates elsewhere in the stadium, and while I told him he was welcome to sit with his friends, he said he'd rather sit with me, because watching soccer was something the two of us liked doing together. OH, my heart.
The night was made even more memorable by a Consol victory, which came after a red card forced the team to play the last 10 minutes of regulation and 20 minutes of overtime down a man and then an incredible shootout. When the game finally wrapped after 10pm, we "rushed" (moved through the crowd at a responsible pace) the field with many of the other fans. We listened to the coach - who had just tallied his 100th win as Consol coach - praise his team's strength and courage and grit, and then Will found his favorite player, Jeremy. Will worried Jeremy wouldn't remember him since they hadn't seen each other in over a year, but of course Jeremy did remember him and that was the cherry on the top of our ice cream sundae of a night. 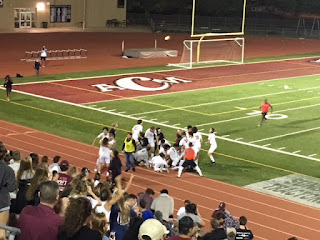 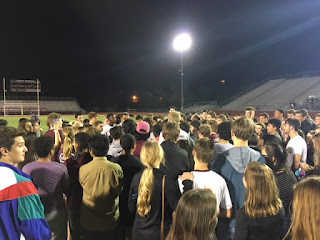 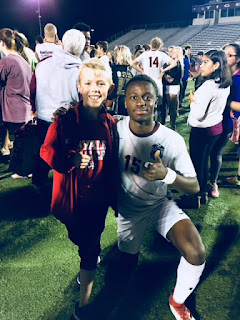 Again, Father Time, please give me more days with my 11- and nine-year olds...

Three
The weekend felt packed with a dance evaluation, dance performance, soccer game, and sleepover, as well as preparations for company and Hallie's birthday. The downright frigid temps and periodic rain throughout all of Saturday and most of Sunday threw us for a loop, but by Sunday afternoon we had taken care of all of our responsibilities and the sun came out just in time to fire up the grill and hang out on the patio.

Tux's weekend highlight? Those chilly temperatures meant we turned the fireplace back on twice. He was in heaven. 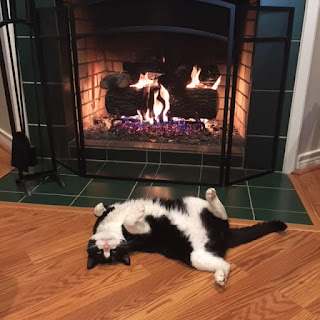 Four
My parents came into town on Monday afternoon and spent the week with us. They helped us celebrate Hallie's birthday, but we also went to quite a few dance classes and soccer practices, tackled a couple of house/yard projects, took a day trip to the outlet mall, worked out at the gym, went for a couple of walks, played badminton with our new net and racquets, and had lots of laughs. Tom and I are incredibly lucky our parents always make an effort to stay connected to us and our kids.