After riding a balance bike for a few months, Hallie learned to ride her big girl bike right before her fifth birthday. I wrote about the accomplishment here, and then a few months later I wrote (a song) about how even though Hallie could ride her bike with the best of them, in the stylings of Dr. Suess, she COULD NOT WOULD NOT learn to stop.

I'm proud to report that three years later, Hallie has finally mastered her bike brakes. It took a brand new bike, a sweet friend who encouraged her, an extraordinarily patient daddy, countless failed attempts, and enough tears to fill our hot tub, but eventually Hallie managed to bring her bike to a complete stop on her own without falling off, without crashing into a fixed structure, and without crying.


And now the girl who hadn't ridden a bike in nearly three years is a biking machine. She and Tom cruise around the neighborhood every weekend, and we took our first family bike ride to the donut shop just last week. College Station remains far from bike-friendly (only about 50% of our streets have sidewalks, the sidewalks we do have are narrow and in need of repair, and we have very few bike lanes and paths...and don't even get me started on the dangers of biking in the street in this day and age of distracted driving), but I believe city government is making an effort to improve its accessibility to/for bikers. When it does, Hallie will be ready. 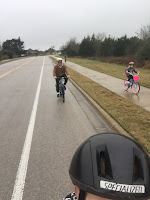 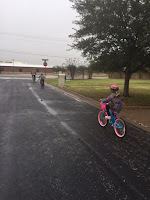 Congratulations, kiddo. I knew that if you put your mind to it, three years later you'd be able to do it.
Posted by Chasing Roots at 5:00 AM