1. After months of planning and weeks of rehearsal, the 4th Grade Variety Show at Will's elementary school - which I coordinate with a friend of mine - went off without a hitch. (Well, with only a few, barely noticeable hitches.) We heard from many in attendance that this year's show was our/the kids' best yet, and while I can't say for certain if these opinions are fact, I can say for certain that this year's show was the most rewarding for me: after multiple years, this was the first in which either my friend/co-coordinator or I had a child perform.
Will, dressed in a (homemade) Rubik's Cube shirt, solved his Rubik's Cube. Because each act could not exceed two minutes, he had to know with certainty that he could solve the cube in that amount of time. He also had to figure out how to coordinate the last twist of the cube with his music; he used The Final Countdown by Europe and had to finish the cube, toss it up in the air, catch it, and then thrust his arm - finished cube in hand - into the air as the rockers blared "the final countdown". I was ridiculously proud of him for choosing to do exactly what he wanted to do in the show and then practicing extremely hard to perfect his act. 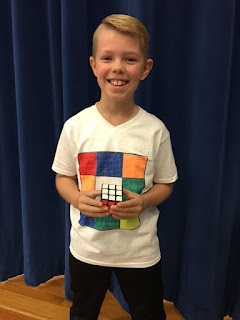 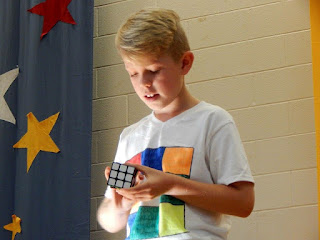 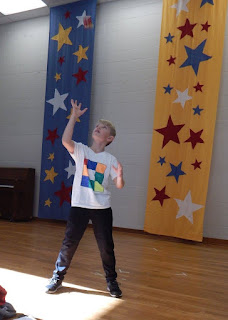 We also had singers, dancers, pianists, a flutist, a guitarist, hula hoopers, a magician, comedians, a martial artist, and a basketball trickster, all of whom brought their "A" game on the day of our shows and made us proud. On the off chance you'd like to watch the show, check it out on YouTube here. (Will performs second to last, about 43 minutes into the show.) 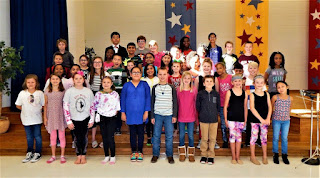 2. We spent the weekend at an out-of-town soccer tournament, and while Will's team didn't do as well as they/we had hoped, the boys wrapped up their run with a shoot out victory. Our goalie was on fire and Will made his shot (whew!), and ending the tournament on a high note meant our weekend also ended on a high note. 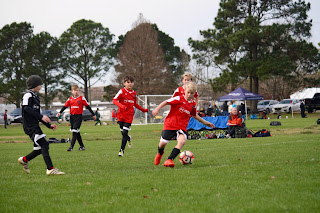 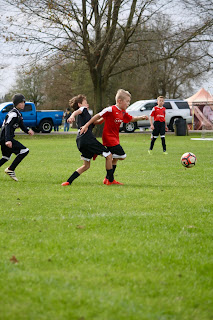 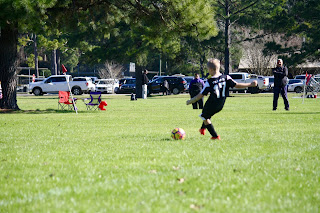 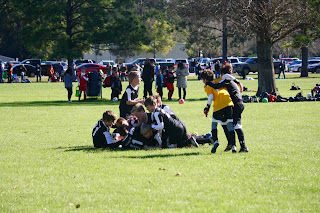 3. About 15 months ago my car began acting up. It started with little problems here and there, but then bigger problems like tires and brakes and electrical arose. We chose to fix each problem, always weighing the financial cost against what we felt the lifespan of the car should/could be and taking into account the fact that I like this car and had no interest in shopping for a new vehicle. But on Saturday morning, when it wouldn't start - at 6am and with all four Ferri and everything we needed for the weekend soccer tournament loaded and ready to pull out of the driveway and into the darkness - I decided the time had come to move on.

This time around the car just needed a battery, so we replaced it and are now officially car shopping! As of right now I think I'd like a GMC Acadia, but I'm open to any and all suggestions...I really need seating for at least seven, a third row that splits, an automatic trunk, and a powerful air conditioner. Thanks in advance for any advice you can share!

4. On a related note, I have great friends who bring me wine and drive me around when they know I've had a rough day/weekend and while my car is in the shop.

5. Last but not least, my hubby has spent the last two months creating from scratch (think designing, soddering, sewing, programming...the whole nine yards) this light suit, which will debut tonight at a special fundraising event on behalf of our school district. (More to come in next week's High Five for Friday post.) I tease him about his light suit to his face, but the kids and I really are proud of how hard he worked on - and how much he had to teach himself to accomplish - this project. 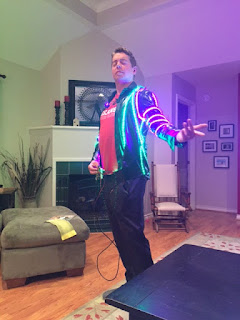 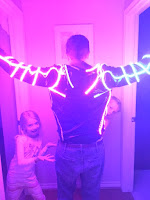