Hallie on the MTA

My dad is an accountant by trade, but for as long as I can remember he has not-so-secretly wished that his career path had taken him in a different direction. If he had it to do over again, he would have been a rock-and-roll star.

He actually was something of a rock-and-roll star back in the day - my mom "called" him after spotting him on stage, playing his guitar and singing with his band, while out with friends. And even though his professional life ended up revolving around numbers, at home he remained a musician.

Growing up my sister and I loved to join in with him and his music-as-a-second-career friends when they held jam sessions in our music room. One of our favorite songs to sing, even still today, was called "Charlie on the MTA", and it tells the story of a less-than-brilliant man (Charlie) who found himself stuck on Boston's subway system (the Metropolitan Transit Authority/MTA). The song was originally recorded as a part of the campaign to elect Walter O'Brien as mayor of Boston, but when the ad became a hit, it was rerecorded by The Kingston Trio.

Let me tell you the story
Of a man named Charlie
On a tragic and fateful day.
He put ten cents in his pocket
Kissed his wife and family
Went to ride on the MTA.

Charlie handed in his dime
At the Kendall Square Station
And he changed for Jamaica Plain.
When he got there the conductor told him
"One more nickel"
Charlie could not get off that train.

Did he ever return
No he never returned
And his fate is still unlearn'd (poor ol' Charlie).
He may ride forever
'Neath the streets of Boston
He's the man who never returned.

Now all night long
Charlie rides through the station
Crying, "What will become of me?
How can I afford to see
My sister in Chelsea
Or my cousin in Roxbury?"

Charlie's wife goes down
To the Scollay Square station
Every day at quarter past two.
And through the open window
She hands Charlie a sandwich
As the train comes rumblin' through.

Now you citizens of Boston
Don't you think it's a scandal
That the people have to pay and pay.
Fight the fare increase
Vote for Walter A. O'Brien
And get Charlie off the MTA.

Hallie learned to ride her bike without training wheels a few months back. After mastering staying upright, she tackled turns and taking off on from a standing position on a flat surface like a rockstar. She still hasn't, however, mastered how to stop. Well, let me rephrase that: she WON'T stop. For some reason, Hallie is terrified to use her brakes to stop or even slow her bike. She just rides faster and faster, and then in circles, until an adult catches her, grabs her handlebars, and brings the bike to an abrupt halt, all the while screaming and crying and refusing to acknowledge that the power to end this nonsense is hers.

After watching this scenario play out a few times, it came to me - Hallie on her bike is Charlie on the MTA.

Let me tell you of a story
Of a gal named Hallie
On a tragic and fateful day.
She kissed her mama,
fastened on her helmet,
and climbed up on her big girl bike.

Hallie took off for a ride
Around the block,
And all went according to plan.
But when she returned home,
She wouldn't use her brakes…
Hallie couldn't get off her bike.

Now all day long
Hallie rides in circles,
crying won't someone please help me!
How can I eat a snack
Or drink my lemonade,
And what if I have to pee?"

Now I go outside
to the street by our house
to watch this all unfold.
I hand her snack
as she rides by,
but the tears continue to flow.

Will she ever stop?
No she'll never stop.
And her fate is still unlearned (poor ol' Hallie).
She may ride forever
on the streets of Brandon's Cove.
She's the girl who couldn't stop. 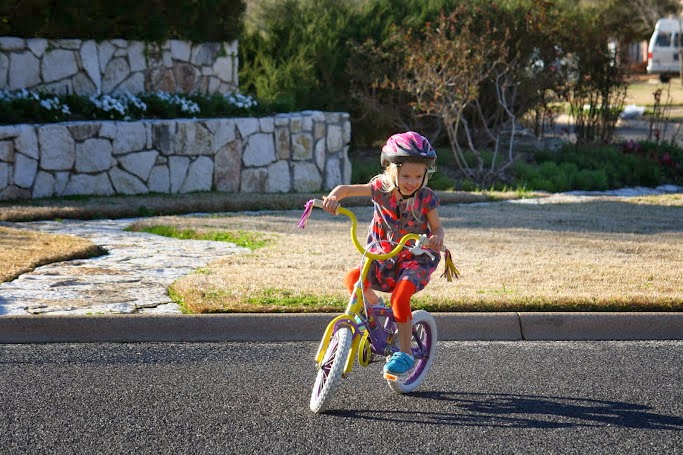 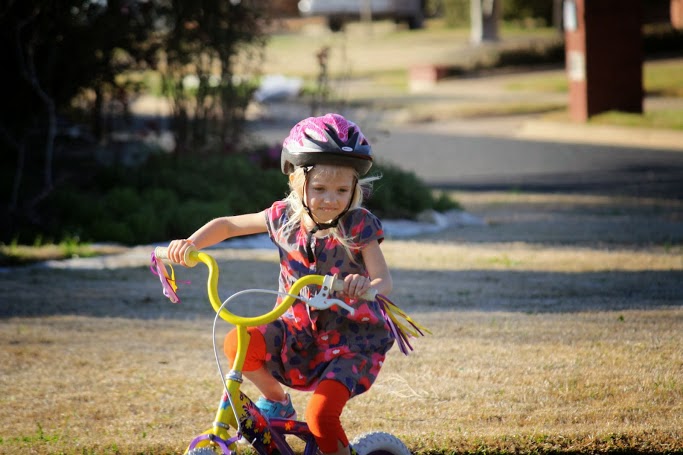 And yes, we're still riding bikes here in Texas. This November's weather rocks my world.
Posted by Chasing Roots at 4:00 AM