Is It Really Worth It?

The sunny skies and warm breeze made that Friday afternoon in January feel more like one that belonged in April or May. Will and Hallie chose to play in the front rather than the back yard, so I set myself up on the porch - complete with laptop and cell phone in hopes of getting a little work done - to keep an eye on them. I texted my friend and neighbor to let her know my kids and I would be outside for a while and she was welcome to send her oldest two over for an impromptu playdate. Shortly thereafter, my friend's front door opened and her daughter, Grace, came running out. I watched as Grace bounded down the front sidewalk and then stopped abruptly next to her mailbox just before the street. I could tell from where I now stood in my front lawn that she could see a car coming; I kept one eye on the road and one eye on Grace, just to make sure she stayed put until the coast was clear.

When the car came cruising down the street that separated me from Grace, I couldn't help but notice that the young woman behind the wheel was very clearly texting while driving. I cringed and said a few choice words under my breath, but then directed my attention back to Grace, who was now crossing the street. Not three seconds later, a booming crash shook the neighborhood. I whipped my head toward the noise and saw bricks flying through the air and landing in the street, on the sidewalk, and in lawns. The texter had driven her car - which I expect was traveling around 30 MPH - directly into and demolished the substantial brick mailbox two doors down.

I gasped, and started walking quickly - then jogging - across my lawn; my first thought was that I needed to make sure the young woman had not been injured. I quickly realized, however, that not only was she fine, she was in the process of turning around to drive away. As she cruised past me heading back the way she came, I ran into the street behind her car and yelled out her license plate number to Will, instructing him to repeat it out loud until I could find a piece of paper and pen to write it down. Once I had documented the license plate number, I made sure my two kids and Grace were playing safely, walked down the street to the mailbox house, and rang the doorbell.

The poor 16-year-old kid who answered the door (I had never met these neighbors prior to that day) looked overwhelmed as I explained what I had witnessed. I gave him my name, my phone number, and the license plate number of the car, and I suggested he start by calling his parents. I also told him I'd be happy to talk to them and/or the police, and then I headed home.

Just a few minutes later, the same car came back down the street, this time driven by a middle-aged woman. I walked back down to the mailbox house, where I learned that the woman was the mother of the driver. I also learned that the driver had told her mother "she'd lost control of the car".

After making sure the two primarily involved parties had everything squared away, I started to walk home again (I got a lot of steps in that day) but stopped halfway. I knew I had to tell the mother; if it had been my child texting while driving, I would want to know. I approached, put my hand on the mother's shoulder, and gently said, "I need to tell you something." I then shared with her what I had seen, why I had been watching the road and her daughter behind the wheel so closely in the first place, and that if her daughter had veered off the road just two houses earlier, she would have hit not just a mailbox, but an eight-year-old little girl named Grace, who had been standing in front of her own mailbox waiting to cross the street.

I don't share this story lightly, or to scare you. 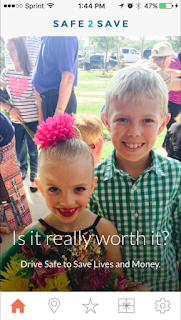 Actually...I take that back. I do share this story to scare you. Texting and driving terrifies me, and it should terrify all of us. We should fear texting and driving like we fear drinking and driving; according to the National Highway Traffic Safety Administration, driving a vehicle while texting is six times more dangerous than driving while intoxicated (source). Every day in the United States, nine people are killed and more than 1,153 people are injured in crashes involving a distracted driver (source), and when distracted driving is broken down, 78% of all distracted drivers are distracted because they have been texting (source).

I also share this story because it serves as a perfect lead-in to a (at least partial) solution to this problem: a simple yet effective app, created by a woman here in BCS, that reminds and rewards users for saying "no" to distracted driving.

But...because post has already gone on for ages, I will write about the story and the woman behind the app a week from today. Please come back then, and in the meantime, stay safe on the road by putting down your phone and encouraging others to do the same.
Posted by Chasing Roots at 5:00 AM