Writing
I bit off a little more than I could chew in February - one article for Mama Bear Dares (a new venture for me), one article for Texas Living Magazine, and two articles for MomsEveryday on top of my regularly scheduled programming here and social media updates for the Red Cross - but I anticipate making all of my deadlines...by the skin of my teeth.

You can see the first of the MomsEveryday posts - an enhanced and more detailed version of an Adulting 101 post I shared on Chasing Roots a few weeks ago - here, but everything else won't run until March or even a little later in the spring.

On a related note, I'm particularly proud of two Chasing Roots posts I shared this month: Is It Really Worth It? and SAFE 2 SAVE. I (re)share links to these posts so that if you missed them the first time around, you could consider reading them today; both cover societally relevant topics that are important to me...and to many others as well. Thank you!

Reading
Well, I finally finished a book: Would You Eat Your Cat? by Jeremy Stangroom. Both Will and Hallie were mortified when they saw the book sitting on my nightstand, as if I would actually consider answering the question in the affirmative. 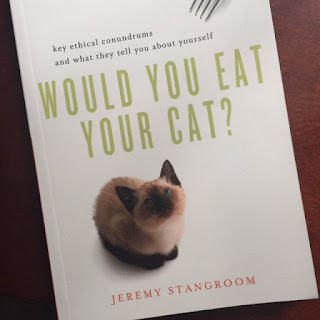 I only had about 75 pages left in this book, so I can hardly say I've emerged from my reading rut. I have a new goal for the month though: I plan to read (at least) 10 pages - of any book - every night in March. I hope this goal helps me get back into the reading groove.

Watching
Will, Hallie, and I LOVE Kids Baking Championship on The Food Network. We find the hosts - Duff Goldman and Valerie Bertinelli - entertaining and endearing, and watching these 10-, 11-, and 12-year old bakers motivates Will and Hallie to become more skilled in the kitchen.

We caught only one movie in February: Fantastic Beasts and Where to Find Them. Rarely do we come across movies that appeal to and keep the attention of all four of us; Fantastic Beasts hit the nail on the head twice. Maybe knowing the storyline will motivate me to finally read the book...10 pages at a time.

Listening To
As much as I hate to admit it, my new car's interactive sound system is smarter than me. I've only owned the car for two weeks, but I still have no idea how to work the darn thing other than changing the radio station with the dial. I might need to review the system's features with a technology expert...I think my 10-year-old is available.

I have almost caught up with Young House Love Has a Podcast podcasts, so I'm in the market for a another new podcast. I don't want anything political or hard to listen to - I get enough of that from the nightly news. I'm considering The Ellen Show Podcast (the monologues from her daily shows), Jim Gaffigan specials, Something You Should Know by Mike Carruthers, and The Moth. Thoughts on any of these? Yay or nay? Any other suggestions?

Last but not least, I love Train's new song called "Play That Song". The YouTube notes include a quote from the band: "It was such a great time making the video for 'Play That Song'. The idea to be on top of the world and have the whole town react to the happiness was super fun and corny and sweet and I wish life was really like this video!" I too think the world needs more super fun and corny and sweet.

And I recommend this car diffuser - it's cute, functional, and inexpensive ($12.99 on Amazon) and allows me to protect us with my "stay healthy" oils even when we're on the go! 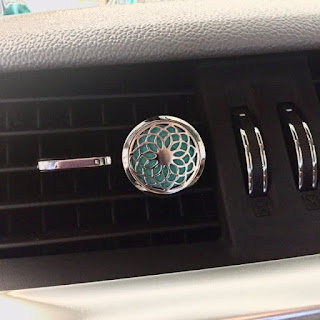 Wearing
I haven't done much shopping since the holidays, so while I only have one new clothing/footwear/outerwear item to share this month, it was a good find for me! I am digging these Puma athletic socks: 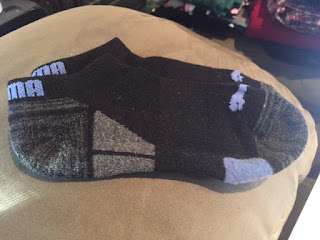 They keep my feet cool and dry and have a built-in arch support, and the elastic ankle band is just wide enough to keep the sock from slipping down into my shoe. I purchased my six-pack - two black, two gray, and two white - at Target, but on occasion I've seen them on Amazon as well.

My mom bought and brought me this fabulous bright kelly green cross body purse last week. It's the perfect size for date and girls' nights, as it fits my wallet, phone, keys, and lipgloss, and looks just about as cute as a purse can look. Swoon... 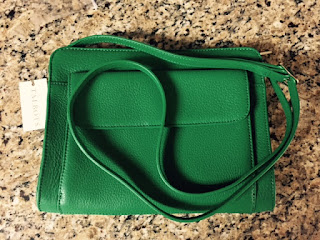