My High Five for Friday posts don't actually highlight what happened during a Friday-to-Friday week. Because these posts must be ready to go absolutely no later than Thursday morning, they usually highlight the happenings of a Wednesday-to-Tuesday week instead. When I sat down on Sunday afternoon to write about the week's happenings up until that point, I had trouble coming up with enough good to fill the five slots below. So rather than wallow in the negatives, I challenged myself to turn them into positives...here we go! (Thankfully my week started improving on Monday afternoon, but at that point I let the already-completed post stand as written.)

1. At her hair appointment, Hallie asked our stylist to cut her hair into a short bob again. Hallie looked ADORABLE in a bob 18 months ago, but I had to talk her out of that style because she's required to wear her hair in a bun for some of her spring dance performances. On a positive note, Hallie is happy with her three-inch trim and I *think* that if she gets her hair cut in a bob the day after her spring dance recital, her hair will have time to grow to "bun length" before the Nutcracker performances next December.

2. Long story short, for an unknown reason Will's wrist did not heal correctly in his first cast. The local doc worked with a pediatric orthopedist in Houston to determine the best course of action moving forward, and we all decided to recast the wrist for two more weeks in hopes that the new cast will encourage the right kind of growth and healing. (If we don't see improvement in two weeks, Will will have to have surgery to rebreak and realign the bone.) On a positive note, Will isn't in any pain, and since the doc told Will he no longer needs to wear the sling, he's feeling footloose and fancy-free.

3. So many Christmas parties, so little time! I felt pulled in multiple directions as I tried to pack and prepare for the holidays in between Tom's department Christmas party on Friday night (to which we arrived almost an hour late because of the extraordinary long wrist doctor appointment), Hallie's dance company Christmas party on Saturday night, and Will's soccer team Christmas party on Sunday night. On a positive note, at least two Ferri represented our family at each party, and a good time was had by all.

4. Both kids had a bone to pick with me when the found out they would miss their classroom Christmas parties because of our travel plans, but they forgave me when they saw this:

5. And last but not least, this girl spent all day Sunday quietly and unknowingly reminding me to stop sweating the small stuff and start celebrating the holidays with only peace in my heart. 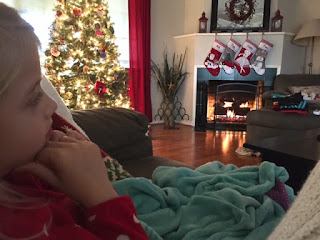 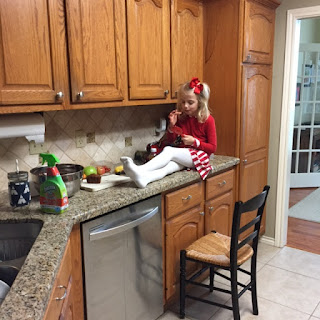 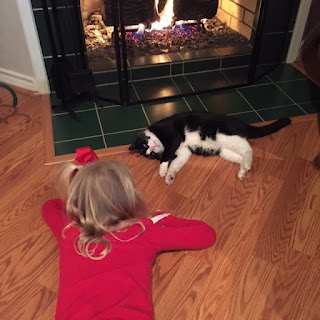