As amateur performance musicians in our former lives, Tom and I spend much of our time listening to, making, and sharing music. Though our tastes - and our children's tastes - differ dramatically, all four Ferri have found common ground in our appreciation for and adoration of the acapella group Pentatonix. (Tom might not say he "adores" Pentatonix, but the kids and I certainly would.) They have a entertaining pop style, perform a mix of uniquely-arranged cover and original songs, and rise above the rest with their tight vocal harmonies, distinct vocal percussion, and deep baselines.

Pentatonix first gained recognition on the television competition program The Sing-Off. From there, they grew their fan base via YouTube and eventually released multiple successful albums, received numerous awards, and traveled the country and world on three tours. And they seem - at least from what I can tell given the articles I've read and according to the documentary I watched - like good people. If my kids are going to look up to celebrities, these five are fine by me.

Last spring and on their most recent tour, Pentatonix made a stop in Austin. I had every intention of taking the kids...until I realized the concert would be held the night before Will's third grade STAAR test. I went back and forth for a full week, until finally the responsible parent in me decided I should prioritize Will's test over taking the kids to a concert. Thankfully, Pentatonix extended their tour and scheduled their final show for November 22nd - my birthday - in Houston. Sounds like we were meant to see them live, doesn't it?

Tom picked up tickets for the four of us and his parents, who would be in town visiting for Thanksgiving, and when the 22nd rolled around we headed to Houston for the kids' very first concert and to celebrate my birthday with one of my favorite groups.

The evening didn't exactly go according to plan: it took us three hours to go the 90 miles between College Station and Houston, the first opening act simultaneously put us to sleep and annoyed us, and because the show started SO RIDICULOUSLY LATE (why do concerts start so late now? The last two concerts I've attended haven't officially kicked off until after 9:30pm) Hallie fell asleep and missed the entire Pentatonix performance. And I mean Every. Single. Minute. I tried to wake her up multiple times, but she was out cold; she did, however, wake up in time to cry for more than half of the drive back to College Station.

On a more positive note, Pentatonix put on an incredible show we won't soon forget. Will in particular delighted in every detail, and watching him take it all in softened the blow of Hallie missing the entire night. The group performed originals, covers, new tunes, and old favorites, and the concert climaxed with breathtaking renditions of Dolly Parton's "Jolene" (for which Pentatonix was joined by the surprisingly impressive Us the Duo) and Leonard Cohen's "Hallelujah". That song touches something deep inside me every time I listen to it, and hearing it live was no exception. 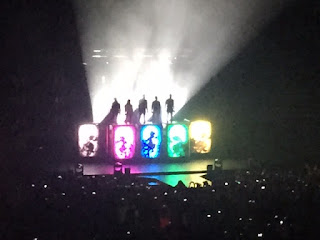 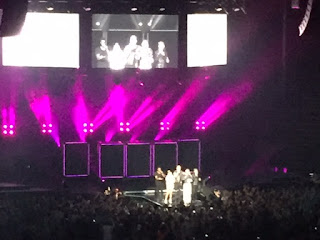 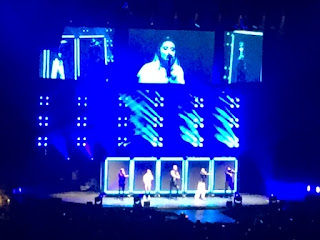 Pentatonix's tour came to end that day in November, but if and when they tour again, buy tickets. Make the drive, spend the money, and carve out the time to see and hear this incredible group of musicians in concert - you won't regret it.
Posted by Chasing Roots at 5:00 AM