About a month ago Hallie and I attended our first dance convention with her fellow Mini Company members and their moms. I've mentioned before that I struggle in my role as a dance mom - it just doesn't come naturally to me, and some of the requirements associated with dance rehearsals, performances, and conventions rub me the wrong way - so while I was looking forward to spending the weekend with my friends, I had reservations about spending an entire weekend in dance mom mode.

I also worried about Hallie's "staying power". Including travel time, the dance convention lasted for almost three full days and included eight classes and multiple different performances and sessions. My Hal Gal has a relatively-low exhaustion threshold and melts down when that threshold has been reached, and I had a sneaking suspicion she might not handle such a busy schedule with grace.

Thankfully the first evening's "Dance Through the Decades" party and first few classes the following morning went well. Hallie enjoyed her hip hop class more than anything else, especially because the instructor - one of the best we worked with over the course of the weekend - spent a few minutes toward the end of class dancing right next to her. 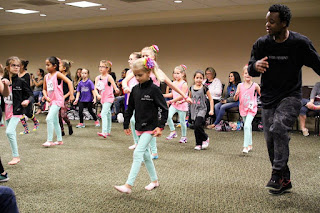 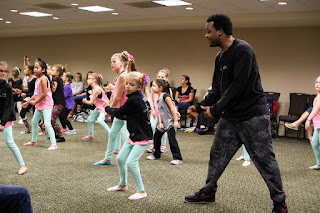 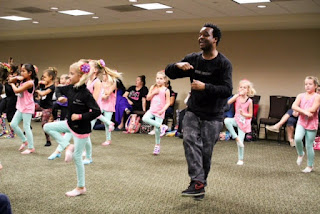 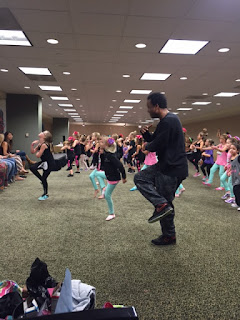 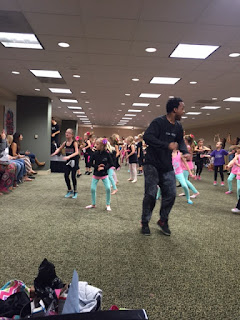 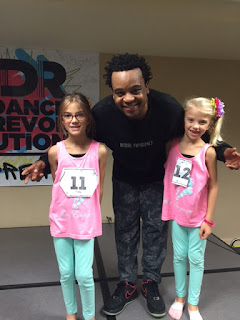 But as the day went on, the inevitable exhaustion set in...and by evening, Hallie (after a round of tears) fell sound asleep in my arms in the middle of a dance showcase.
Hallie saved her "best behavior" for the third day. Tired of dancing and just plain tired (of course the convention took place the weekend of the time change), she refused to have even the slightest bit of fun in the seemingly delightful musical theatre class. If you look closely at the picture below of little girls warming up with push-ups, you'll notice that "one of these things is not like the others"... 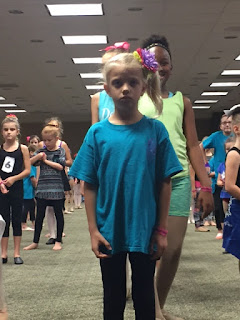 And from that point on the day got better and better...

Midday on Sunday we went outside - for the first time in almost 48 hours - to drop a few bags off at the car. When we arrived we found, much to our dismay, that the little girls had left the DVD player plugged into the backseat power source and the car's battery was completely dead. Since we were staying in the Hyatt Regency at DFW airport, a courtesy service employee arrived quickly and jumped the car. Alex from Guest Services sent us back to the convention and promised to stay with the car while it ran for a few minutes.

The courtesy shuttle employee left for his next job, and Alex waited with my car for 10 minutes before turning it off. But when he tried to restart the car - just to make sure everything was in good shape - it wouldn't start on its own. Alex jumpstarted my car again, this time using his own personal suburban and jumper cables. He let my car run for 20 minutes this time, moved it to a more accessible parking spot, and turned it on and off a few times. Done. Or so we thought.

I left the convention a few minutes before it was time to leave so I could load the last couple of bags. Alex went out to get my car for me, and again it wouldn't start. And again, Alex pulled around his own suburban and jumped my car. In the pouring rain.

Alex is a hero. I would not have made it through that day without him. I tipped him well (I wanted to give him a hug but didn't feel right about that gesture), and the following day I called the hotel manager to share with her how helpful, courteous, and entirely pleasant he had been.

We had no other choice than to hit the road with the questionable battery; we decided we just wouldn't turn the car off the entire way home. About 20 miles down the road the "check engine" light came on, and about 10 miles after that we realized we would need to get gas. After our husbands researched the probability of us exploding if we filled up the tank with the car running, we stopped for gas, took the girls inside, and filled up...without incident, thank goodness.

The rest of the drive went smoothly, except of course for the dual little girl meltdown in the backseat and having to drive through an awful thunderstorm in the dark because of the time change.

Driving into our garage that night felt about as good as you'd expect. I wanted to wash the exhaustion, the frustration with Hallie, the car troubles, and the horrendous weather off me, and to spend a quiet evening (all two hours of it) at home before having to hit the ground running on Monday morning. To be honest, I also wanted to take off my dance mom hat, stomp on it a couple of times, and hide it in the back of my closet.

It took a few weeks, but eventually I started to feel better around our dance convention experience. There are aspects of the weekend I would change (why do we attend a convention 200+ miles away, that takes up three full days, that's held during the busiest season of the year, and that costs hundreds of dollars? Just a few questions to ponder...), but I can now acknowledge the good; I recognize how special and important the bonding that occurred - between Hallie and her mini company friends, and between me and my fellow dance moms and friends - was to everyone involved.

I finally feel like I can pull my dance mom hat out of the closet...just in time for Hallie to dance in The Nutcracker this weekend. A dance mom's work is never done... 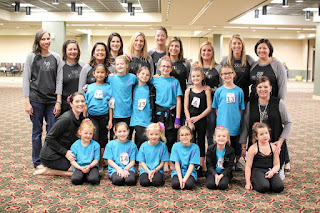