As I'm sure you can tell, I STILL can't nail down a solid title for this series. Please help!

Writing
I'm knee deep in a magazine article about must-visit restaurants in Texas college towns. If you went to school in Texas, I’m interested to know where you’d send your friends if they were headed to your old stomping grounds for a weekend of football and good eats. Email me at erin@chasingroots.com if you'd like to share information about your favorite restaurants!

Reading
I just started a new book, but I don't want to share its title and author just yet. The reason, you ask? I have a special post about this book - one that includes a giveaway - in the works. Watch for both in late November or early December! 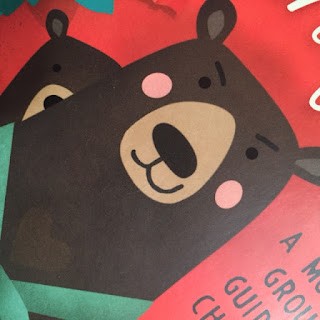 Watching
You mean besides soccer practices and games?

I've fallen behind on the many dramas and comedies in my DVR, partly because we reconfigured which televisions in our house have cable boxes. Our bedroom no longer has cable, so while settling down in bed at night I have been working my way through Drop Dead Diva - a somewhat cheesy but enjoyable dramedy - and...even though I've seen every episode multiple times...Friends. I miss my Friends.

On the movie front, I watched Goosebumps with the kids, and while we enjoyed the film, I wouldn't watch it a second time. I took Will to see Middle School: the Worst Years of My Life, and LOVED it. Really, friends, go see this movie. The middle school-esque jokes went over Will's head but the humor and message hit both of us exactly where the creators intended. Oh, and bring tissues. (Trust me.) I saw The Girl on the Train with friends, but having read the book, the movie came in a distant second behind simply spending time with my girls. And lastly, I watched Netflix's Mascots with Tom and his parents. The film stars many of the same comedic geniuses as Christopher Guest's Waiting for Guffman, Best in Show, and A Mighty Wind, and though this group of improv masters do a decent job of moving the plot along, Mascots just isn't as ridiculous hilarious as its preceding mockumentaries.

Listening To
I listen to my favorite podcasts - Serial, Criminal, and Someone Knows Something - while exercising and while getting ready in the morning, and since I'm caught up on all three, I have been on searching for something new. I've tried a few episodes each of Actual Innocence and Stuff You Should Know from HowStuffWorks.com, but thus far nothing has stuck. Any other suggestions?

On a musical note, while driving to Houston for one of Will's soccer games, I decided to listen to a CD from my long-abandoned car CD case. I pulled out the soundtrack to Rent, and was pleasantly surprised to learn that even though I haven't listened to the music in years, I still remember every word. That's probably why I can't remember the three items I need to pick up at Target unless I write them down...

Trying/Using
Trying...my hand at crafting Halloween costumes. Using...my glue gun. Recovering from...severe glue gun burns on my hands. The things we do for the ones we love! 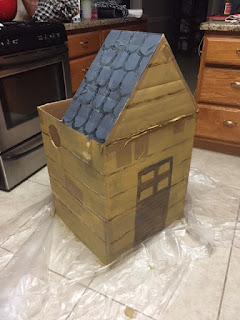 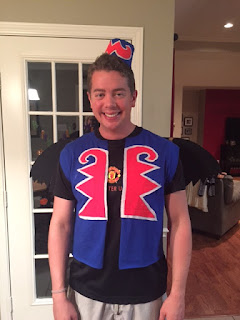 I'm also using my new sparkly champagne flute to "fancy up" my occasional class of wine! 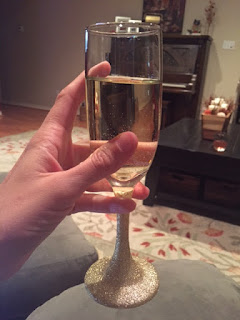 I didn't make the glass, but my friends who did tell me the process was easy: modgepodge, glitter, then modgepodge again. I think these would be equally fabulous in holiday colors - can you imagine a gorgeous set of red and green glitter flutes for a Christmas party?

Wearing
As I type this, temperatures outside climb toward the upper 80s. I am done, however, with shorts. Bring on the jeans, no matter how hot it gets outside. And maybe the boots too, just because I bought this fabulous pair in Chicago and can't wait to incorporate them into my Texas wardrobe! 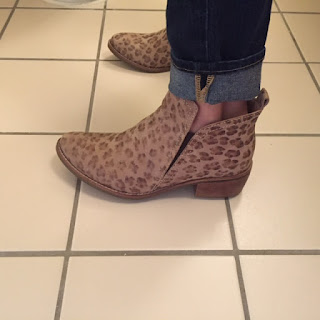 Eating/Drinking
I found a few delicious recipes this month!
Enjoy!