1. Thanks to everyone who sent in their daddy daughter photos in honor of Father's Day! Here are a few of my favorites:


Cora and Emma's daddies have it all figured out, and that's easier
said than done, given the fact that both have naturally curly hair. 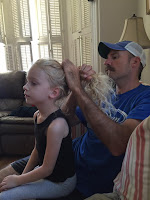 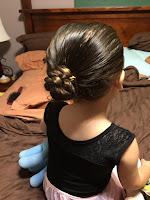 Lily's daddy (who happens to be my brother-in-law, which is why I can call him
out here), on the other hand, should probably work on his technique a little bit.

2. After nearly nine months, I finally visited my doc about my plantar fasciitis. She referred me to a podiatrist, and at my appointment last week we ruled out broken bones and bone spurs and confirmed my self-diagnosis. Though the plantar fasciitis is frustrating, I breathed a sigh of relief when I heard that my problems end there. And I certainly won't complain about the podiatrist's recommendation that I have my foot professionally massaged regularly!

3. Earlier this week my Hal Gal spent 48 hours fighting off an unpleasant stomach bug. She is without a doubt my bravest, toughest, and most cooperative patient (and is back to 100% now), but even she needed to spend two evenings, two mornings, and one afternoon cuddling on the couch. I hate it when she feels yucky, but I love those extra snuggles.

4. On a related note, on Saturday morning - right before Hallie fell ill - we bought the entire Full House series on DVD. Target had the set on sale for $20 off the regular price, and I just couldn't pass up that deal...which turned out to be the best decision I made all weekend, because Hallie and I watched almost the entire first season while she was under the weather. I don't usually binge watch television shows, but when I do, I watch Full House. 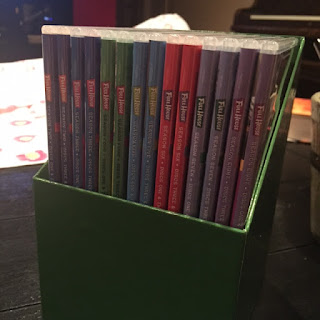