I heard about the escape room concept a year ago, just before the first establishment of its kind opened in our area. For those unfamiliar, in a escape room, participants are locked in the setting of a story - like a house in the 1990s, a laboratory, or a control room - and given 60 minutes to get out using only the clues and by solving the puzzles found within the scene.

Though I initially added "escaping" to my Texas Bucket List, when I learned that escape rooms have become popular all over the country I had to move this challenge to my plain old regular bucket list. And last Friday night I had the opportunity to cross it off with a confident flourish.

Tom and I - along with six friends - registered for the 90s-themed room. The woman who prepped us shared that the standing escape record of 49 minutes (meaning the participants escaped with 11 minutes left on the clock) for our room had been set by a group of 14-year-olds. Determined not to "lose" to teenagers who weren't even alive in the 90s, we entered fully prepared to beat the heck out of their time; 40 minutes later and with 20 minutes to spare, we cracked the code and emerged victorious. Take that, teenagers who have no idea how to use a rotary phone! 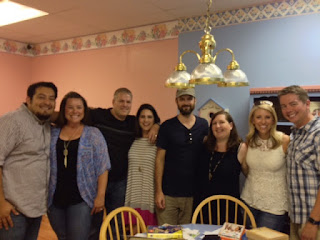 Because we'd done so well in the 90s room, the staff asked us if we would like to stay for an additional hour and beta test their newest room. After checking with our babysitters, we decided to stick around - we just couldn't pass up the opportunity to experience the virus outbreak/scientist's laboratory room before anyone else.

Oh, and we escaped that room too. 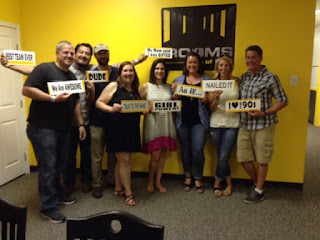 It's easy to get into a rut when it comes to dates and evenings out, especially in a city the size of ours. But our last two dates - an adult swim party and now escaping both a time machine threatening to send us back to the 90s and a potential deadly virus outbreak - have helped us mix things up a bit this summer.

Next up, flying on the trapeze! Maybe.
Posted by Chasing Roots at 5:00 AM