I started watching home improvement and makeover television shows back in 2000, when Trading Spaces first aired on TLC. (Anyone else remember the episode on which Frank covered the walls of the room - every last inch of them - with hay?!) I have always disliked painting, rehabbing, and remodeling my own home, but that show ignited my passion for lounging on the couch and watching other people paint, rehab, and remodel their homes.

HGTV now dominates home improvement, design, and decorating programming, and I spend a fair amount of time enjoying the network's many different (but strangely similar) shows. When a new program - Fixer Upper - joined HGTV in April 2014, I began watching and almost immediately became hooked. I appreciated the show's relaxed, non-confrontational vibe, and I liked the stars' personalities, design styles, and decor preferences. As an added bonus, all the action went down in Waco, just 90 miles from where we live. When I heard the hosts of the show ran their own boutique, showcasing and selling products inspired by their own farmhouse and often seen in their televised makeovers, I added visiting the shop to my Texas Bucket List. I never made it to that first boutique, but a couple of weeks ago, two friends and I dropped our kids off at school, hit the road bound for Waco, and eventually did ourselves one better: we visited the brand new Magnolia Market at the Silos.

The large block-size piece of property owned by the Fixer Upper couple holds a large feed barn, as well as two silos. Though the feed barn received quite a bit of TLC (you can see pictures of the feed barn prior to its renovation here) on its way to becoming home to the Magnolia Market and monthly antique vendor trade days, the soul and history of the building remain intact.
We purchased a few things - birthday and Christmas gifts for family members and friends, as well as a couple of goodies for ourselves - but could have easily spent SO much more…eventually we had to just walk away and get our minds off the shop with some delicious macaroni and cheese.

The shop employees informed us that the silos, which remain untouched, will be addressed during "phase 2" of overhauling the block. Though it might be a couple of years, we plan to go back when they've been completed for phase 2 of crossing this experience off my Texas Bucket List.

My last Texas Bucket List adventure didn't quite live up to my expectations, so I'm thrilled this one did. Slowly but surely I'm making my way through the experiences Texas has to offer! 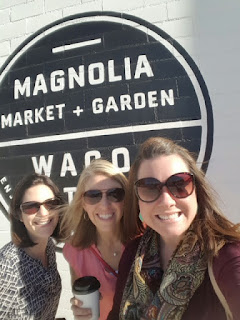