1. I attended my first "Favorite Things" party at the end of last week. We purchased one - or a few - of our favorite things around a certain dollar amount and brought our wrapped package to the party. Then we lined the festively dressed gifts down the center of the table, drew numbers, and made our selections in order of our numbers. Over wine and hors d'oeuvres we thanked our lucky stars for such good friends…and such fun gifts! 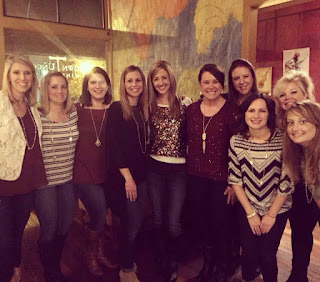 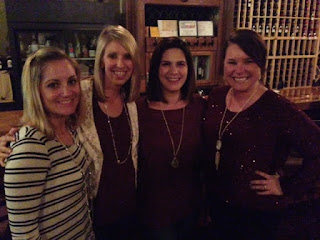 2. Last Friday night Tom and I attended his department's Christmas party. When Tom first started working at TAMU, department gatherings meant stress rather than fun. But now that we've lived here for five years and Tom has more than settled into his job, these events provide us with an opportunity to catch up with friends, enjoy better food than we would ever pay for on our own, and perhaps even win a door prize or two. (We won door prizes both last year and this year!)

On the way home Tom and I stopped at park alive with Christmas lights to take a picture of ourselves with the lights…we had a little trouble working with/around the lights, but had fun wandering the park, hand-in-hand, on that unseasonably warm night. 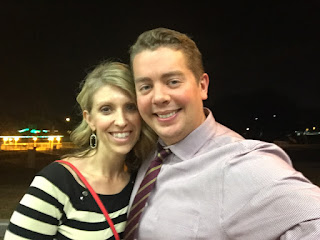 3. Every December our community hosts a fantastic (or so I'm told - I can't speak from experience) full and half marathon, and on the Saturday before the Sunday races, the host organization puts on a kids "marathon". Will started running in the kids marathon two years ago, and Hallie ran for the first time last year.

Nasty weather threatened this year's kids marathon so organizers changed the start time and grouped all of the ages together. This helped us out tremendously because it meant Will and Hallie (and Tom and I) could all run at the same time.

Tom planned to run with Will, who, because of his sprained ankle, had been threatened instructed to take it easy and jog slowly. I planned to run with Hallie, who when running needs her mama to hold her hand and remind her repeatedly that yes, she actually can finish the race.

It became apparent a few minutes before the race started that Will had no intention of taking it easy. Neither Tom nor I can run as fast as Will for the length of time he can sustain his pace, so we decided to just release him and let the medics deal with the injuries he would likely incur along the course. Instead, Tom ran with Hallie and me, which worked out perfectly because it meant he could capture with my phone camera the agony and the ecstasy of Hallie running a kids marathon.

Long story short (too late), Will placed sixth in our heat, Tom took great pictures, and thanks to a constant barrage of positive encouragement and slightly veiled threats, Hallie ran the entire race. 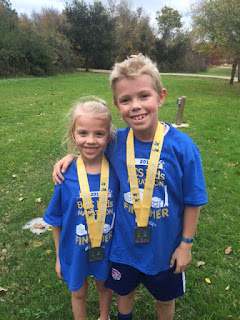 4. On Saturday night we headed out on our annual "Polar Express" drive to look at Christmas lights while drinking hot chocolate and eating freshly baked cookies. We missed out on a live nativity we wanted to see because of thunderstorms, but we still found quite a few worthwhile light displays - including a couple set to music - throughout the city. 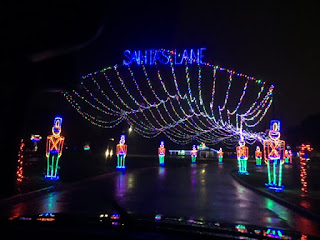 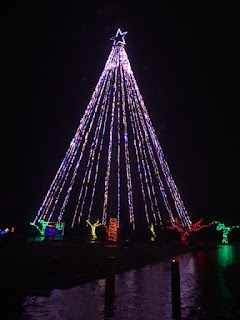 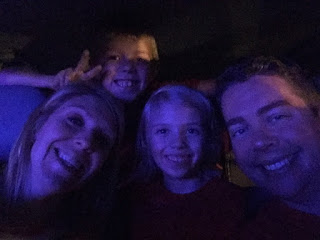