Last year Tux found the Christmas tree fascinating, but as he weighed half as much as he weighs now, he could only wreak half as much havoc as he can wreak this time around.

It began the moment the tree came out its box. Tux scrambled up each section as fast as Tom could attach it to the sections below.
Tux cleared out while we added the garland and ornaments, but as soon as we stepped back to admire our work he shimmied up the lower branches and nestled in near his favorite Green Bay Packer.
For a week or two Tux spent the majority of his time taking ornaments off the tree and hiding them around the house.
Eventually Tux moved on from hiding ornaments to battling the Christmas tree skirt. Five or six times a day he would pull the skirt out from under the tree, drag the skirt across the living room, and nervously curl up where the skirt had been minutes before. When I would find the skirt out of place I'd put it back, but as soon as I'd leave the room he'd pull it out from under the tree again. Not sure what all that was about... 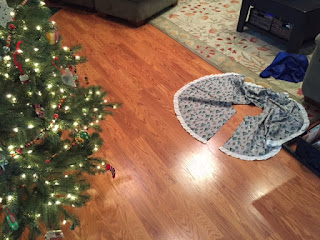 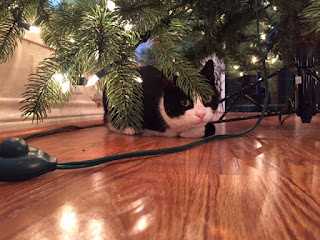 Then suddenly one day Tux tired of the tree, its intriguing ornaments, and its intimidating skirt. Just like that he moved on…I think he's saving himself for our Easter baskets.
Posted by Chasing Roots at 5:00 AM